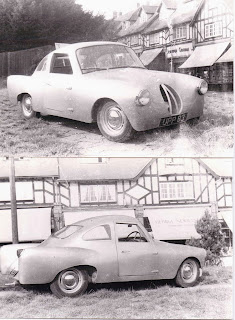 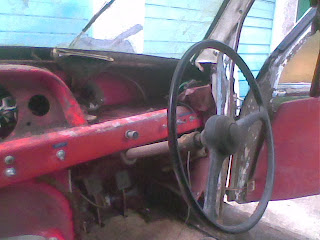 I have had some updates recently on the progress of 2 Atom Major/Atomota restorations, one being undertaken by Brian Waters here in the UK and the other in America with Frank Maine. Those that have read further back in the blog will be familiar with Brian`s car, he has recently got the bodyshell removed from the chassis and is now in a position to weld in the repair sections necessary. Here is a shot of the chassis that Brian emailed over. 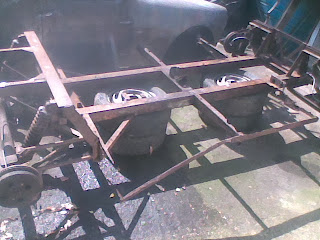 The second car is owned by Frank Maine, it has been modified at some point as the original chassis has gone and the body shell modified and fitted onto a Subaru chassis. Here are some pictures with Frank`s description.

These photos were probably taken in the late 1980’s, as the photos were in the same envelop as photos taken at the last race at Riverside Raceway in 1989. A friend of mine spotted the ad for the Atomota in Hemmings. He inquired and got some photos of the car. From photos of the car I was sure that nothing of the original Fairthorpe chassis remained. At that time, I had no interest in it, didn’t want it  and recommended he should not buy it, but he bought it anyway. Perhaps, if it had arrived as a nearly running drivable car, if might be worth maintaining it as it was, but there was no engine or gearbox. As a unibodied car, the Subaru would depend on its roof to provide stiffness to the chassis. Add an additional 10 to 15 years of rot on what was left of the chassis and the chassis, in an accident would probably fold up like a pretzel. So we decided to removed the Subaru from the Atomota.


The Atomota as it arrived from Ohio, delivered by the shipping company. 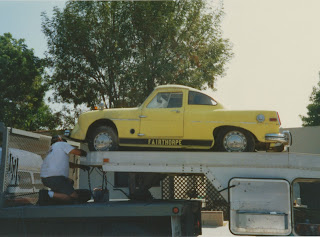 The Atomota frontal view from various angles. The front bumper looks like a 74’ Volkswagen Super Beetle rear bumper. Still think it looks pretty horrific to me. Oh well, makes you wonder why people sometimes do the things they do. But, where would this car be today if they didn’t do what they did. Long gone and forgotten? Perhaps. 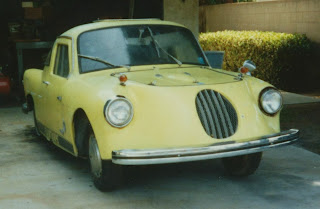 The interior of the Atomota.  All of the original interior was gone, replaced with the dash, steering column and seats from the Subaru. 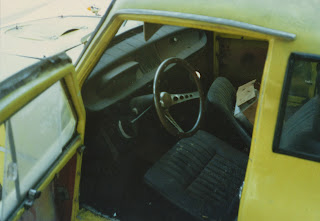 The side profile of the Atomota, is it in a family way? To me, from this angle, the Atomota looks just a little bit pregnant. The Subaru had a longer wheelbase than that of the original Atomota. The rear wheel arches where definitely cut out and moved back in the rear wings to match the extra length. I think that it should not be that difficult to reverse this. 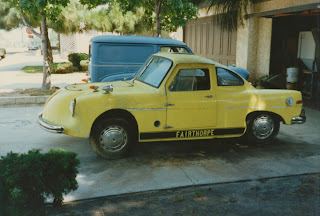 The Atomota rear view from various angles. Unfortunately, the rear wings do appear to have been cut back and squared off in order to mount the rectangular tail lights from the Subaru. These might take some re-sculpturing to restore the original rear wing appearance. The rear bumper looks like a 74’ Volkswagen Super Beetle front bumper to me. 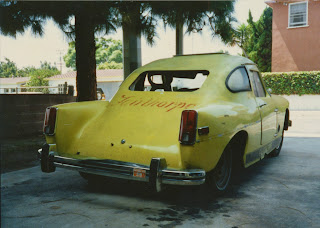 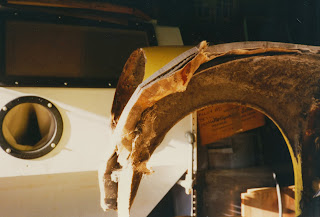 The centre section after removing it from the Atomota , what a mess of wire mesh and fiberglass., with the intention of liberating the original fiberglass grill piece. 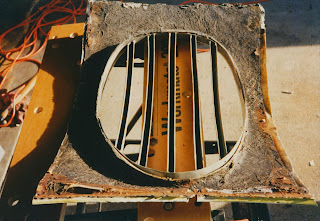 Thankfully, the original BSA engine sized access hatch was retained and incorporated into the new engine cover. Dismantling this cover to liberate the original hatch and the original fiberglass surrounding it. 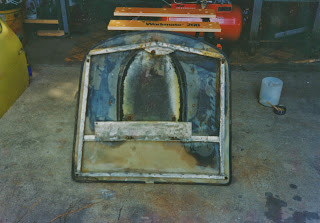 When John Allan was writing his book, he ask me “What are you going to do with the Atomota bodyshell? At that time, I wanted to say, “I am going to cut it into four smaller pieces and then take it to the dump.” But instead I think I said something like “Restore it”.
Keep up the good work Frank..............
Posted by Martin Collins at 10:03 pm No comments:

Fairthorpes take a stand at the NEC! 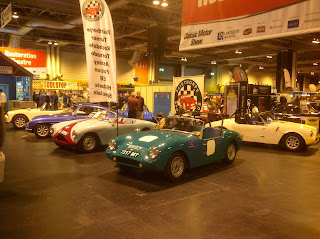 This years Fairthorpe Sports Car club stand at the NEC Classic Car show features 3 Fairthorpes along with a Rochdale Olympic, a Turner and an Ashley. The Fairthorpes are from right to left Brian Jackson`s Dolomite Sprint  powered EM2. Andy Winston`s race prepped Ford pre crossflow powered Mk2 and my Triumph engined EM Mk1 789 ERO. If you are visiting the show on Sunday 17th drop by and say hello.
Posted by Martin Collins at 9:15 pm No comments: 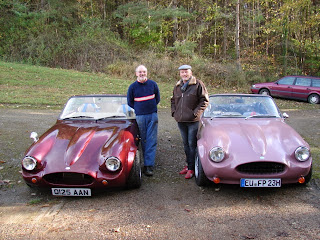 One Fairthorpe that seems to have moved around a bit lately is the Metallic Burgundy Pathfinder V8 which was sold on Ebay to Barry Mays, Barry had previously owned the Ford V6 engined Pathfinder which now lives with Wolfgang Puritz in Germany.  Unfortunately Barry then had to sell the V8 car as he was unable to work due to a shoulder injury so the car reappeared on Ebay. This time it was spotted by Wolfgang who mentioned it to his friend Alfons Rubbert, a deal was done and Alfons now owns the V8 engine car, he also informs me that he also used to own the V6 car before selling it to Wolfgang.........Confused? I`m not surprised! 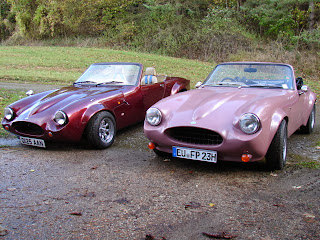 So these two Pathfinders are owned by good friends who live very close to one another in Germany, Alfons has kindly sent me some pictures taken recently when he and Wolfgang got together with their Pathfinders, between them they own 1/4 of the 8 cars that Motorville (Watford) produced in the 1980`s. The Burgundy Rover V8 powered car was number five and the lilac Ford V6 engined one was the last produced of the eight. 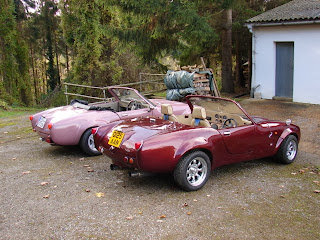 Posted by Martin Collins at 8:03 pm No comments: 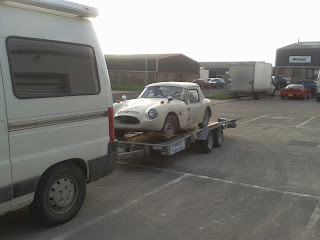 I have recently heard from Phil Whitmore with an update on the restoration of his Electron Minor 403 MOO, he has made some good progress and hopefully 2014 may see another Fairthorpe back on our roads. 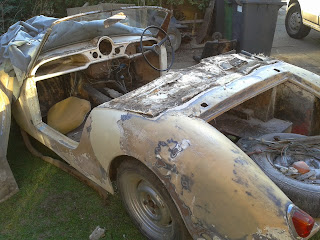 I will let Phil give you an update:-

`We have now fitted the fabricated outriggers on the chassis and it is presently at the shot blasters for cleaning and zinc plating so hopefully it will see another 50 years! The engine and gearbox have been apart for inspection, cleaning and painting whilst the shell now sits in 3 parts whilst we work our way through some nasty damage that was bodged up on the rear quarters and the time consuming removal of all the crazing. Other work has seen me prototyping some fiberglass seats molded off of the one barely intact original seat we had with the car....time and trimming will tell!` 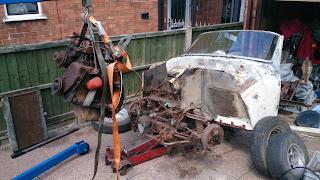 Phil kindly sent some pictures as well, a few of which I have included here, I will update you with his progress as the restoration moves forward, an email a couple of days later included a picture of the chassis back from the shot blasters. 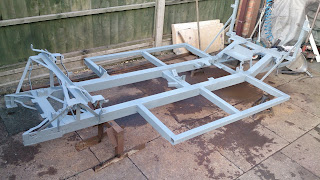 chassis with replacement out riggers and side rails fresh back from the shot blasters.
Posted by Martin Collins at 7:26 pm No comments: 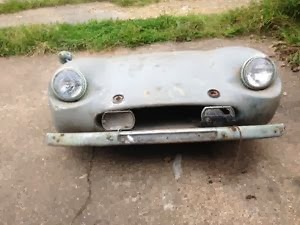 Posted by Martin Collins at 9:58 am No comments: