Picture of the week: now that's what I call a wedding present! 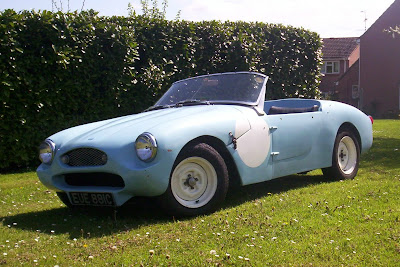 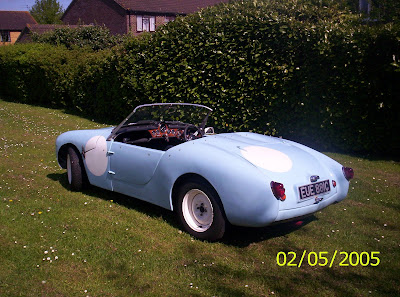 This Fairthorpe EM is owned by FSCC member Gary Julian. It was bought for him in 1986 as a wedding present from his wife-to-be - he suggests it may have been to keep him in the garage and out of the pub!

The car was first supplied as a kit in 1962 to two brothers and apparently it took them a couple of years to build it as it is registered on a `C` plate. By the time Gary became the owner the car required plenty of TLC. As it was pretty bashed about, he changed the bonnet from the original Electron style one with an opening hatch to a mkII twin vent. That's one of the good points of owning a Fairthorpe Electron Minor - six different bonnet shapes were produced over the years and they can all be adapted to fit any EM. The engine in the car is a Triumph Herald 1147cc engine with twin SU carbs.

Gary will be bringing the car along to the Fairthorpe Gathering on the 15th of August at Stow Maries WW1 airfield in Essex so if you want to take a look at it closer make sure you don't miss the event.
Posted by Martin Collins at 10:14 pm No comments:

Picture of the week - if you go down to the woods today... 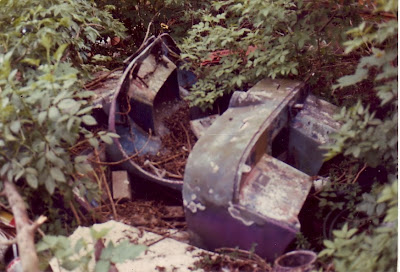 Well actually, if you did go down to the woods today you would be 25 years too late as I found and removed these Fairthorpe EM1 remains from behind a garage in Essex around 1985. I'd had a tip-off that they were there and my source told me the rest of the car had been scrapped.

The rescued panels were in very poor shape, but it just goes to show what may still be lying around. A 1950s fibreglass Ashley was recently discovered lying down the side of a riverbank, where it had lain for many years half in and half out of the water.

You never know what might turn up and where so keep your eyes and ears open!
Posted by Martin Collins at 8:38 pm No comments: