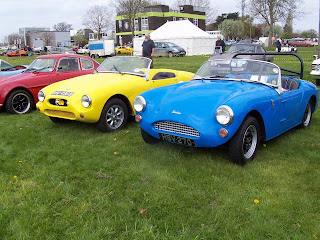 I have had a couple of general inquiries on the Electron Minor HSV 270 but it is still available and my other EM 789 ERO is due back from the paint shop shortly so I have decided to reduce the asking price.
I am looking for £4750 ono and it comes with a years membership to the Fairthorpe Sports Car Club, buy it now and you will be able to join in with it at this years Fairthorpe Gathering which takes place on the 4th August at the Museum of Berkshire aviation at Woodley nr Reading (RG5 4UE). I can be contacted on  07952 930042 or at kartman.nascar24@btinternet.com

More details on the car and the Gathering can be found further down the page.
Posted by Martin Collins at 8:46 am No comments: 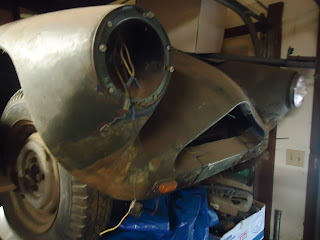 A recent contact from America has provided pictures of a VERY early Fairthorpe Electron Minor, the car in question is in fact the very first LHD EM produced by the company and it has the original bonnet which was developed from the Atomota front end. This is the first bonnet of this type I have seen apart from the aluminium prototype as fitted to Noreen Bennett`s car which was Electron Minor number one. Noreen`s car survives but lost it`s original Aluminium body a long time ago and has a later fibreglass bonnet on it now. That makes this a very significant `find` as unless someone has another one tucked away it is the only survivor of this original bonnet shape, perhaps only a few were made as my EM 789 ERO was produced 8 months later and does not have the protruding headlamps. 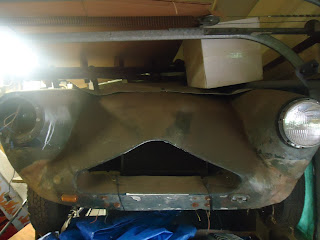 Checking the production records i have told me how significant this car was and also that it was supplied in green gelcoat. Dave tells me it still in green to this day, he purchased the car for the princely sum of $50 in 1980 at a garage sale and that the engine/gearbox were in bits and rusty so were disposed of. He is now about to embark on restoring the Fairthorpe and is thinking of putting a Standard 10 engine back in the car rather than a late model motor now he has become aware of the car`s significance. 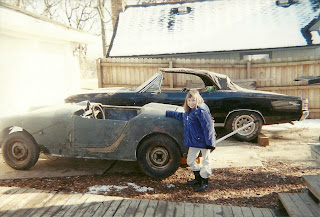 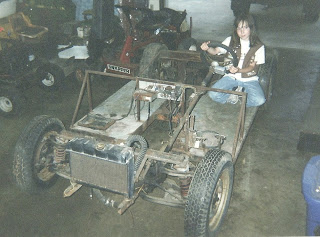 I look forward to watching this EM take shape and seeing some more pictures.
Posted by Martin Collins at 9:28 pm No comments: 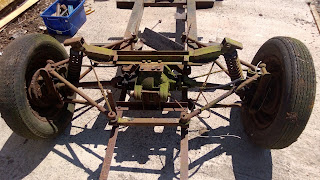 There has been a recent flurry of activity with several Fairthorpes being removed from long term storage and the work to return them to the road has been started.
The first of these belongs to Clive Weelen , he has owned the car for 30 odd years paying very little for the car when he purchased it needing a rebuild, Clive is only now in a position to start the restoration and he has made fast progress over the last few weeks. The EM is a 1960 Mk2 with independent rear suspension and the twin vent bonnet and registered 316 PBH, Clive is looking for any history for the car prior to his ownership. Most of the parts seem to be with the car except the pedal assembly, if anyone has a spare set lying around I can put you in touch. The body shell looks reasonably solid but will require a good bit of TLC to return it to it`s former glory whilst the chassis looks to be quite well preserved now that the outriggers have been re welded onto the main chassis. 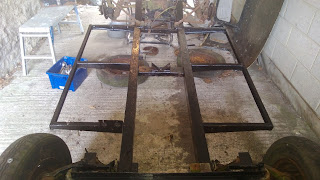 As you can see the bonnet has been liberated from the hedge it has been living in for a number of years!
Clive will be sending more pictures as he goes along so I will keep you updated on his progress. 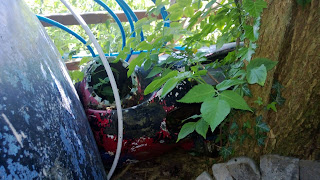 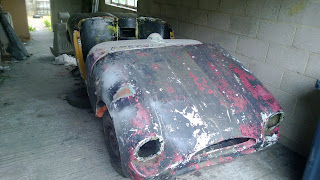 Posted by Martin Collins at 8:41 pm No comments:

It has just come to my attention that a large number of posts have disappeared from the blog. I can find no explanation for this, other than it being a technical issue with Blogger and I'm working to resolve it.

Some of the missing posts relate to the very topic I set this blog up to document - the restoration of 789 ERO, and include the fantastic day when it passed it's MOT and its subsequent appearance at Silverstone and Dad driving it round the circuit.

At one point in 2011 four months of posts have simply vanished.

I will keep you updated on my progress retrieving them, but if they have been lost for good I will be looking to move the blog to a more stable blogging platform in the future.
Posted by Martin Collins at 11:52 am No comments:

There is currently a TX Tripper project on ebay, it has had a lot of money spent on it in recent years and was featured in Motor magazine in 1971, starting price is £1800.
http://www.ebay.co.uk/itm/TRIUMPH-BASED-GT6-Vitesse-Herald-TX-TRIPPER-KIT-CAR-/151060782606?pt=Automobiles_UK&hash=item232bec9e0e
Posted by Martin Collins at 10:08 pm No comments: