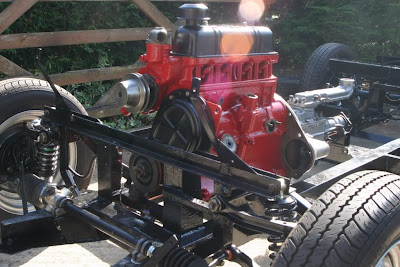 I have had a call from FSCC club member David Boucher who has decided to sell his MK1 Electron Minor which is Standard 10 based. The car has been restored to a rolling chassis stage with engine and gearbox done also. The bodyshell etc is all there but needs fitting and the restoration completing, this is comparatively a quick resto job as a lot of the graft and expense has been done. Much money has been spent on among other things a new set of Dampertech adjustable shock absorbers with springs ( cost £460 ), all new braking system and cylinders, ball joints, trunnions etc. The engine is a 948cc Standard 10/ Triumph with twin SU carbs and has had a new water pump and timing chain fitted. The car comes with a period Smiths heater, original Fairthorpe bonnet badge and a good hood. Dave tells me that the body work is not bad, the car has the electron style nose, the interior trim is all there but only good for patterns now and the original Fairthorpe `tin bucket seats` are there but rotten (i have a mold to make new fibreglass ones). There is no logbook with the car but he has the original chassis plate, number plates and an old tax disc. The car should be eligible for it`s original number and a log book from the DVLA by going through the Fairthorpe club once the car is nearing completion.
You can see pictures now on http://www.photobucket.com/ 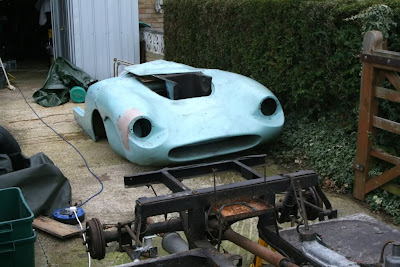 You can sign in using the word DGBOUCHER and use the word ELECTRON as the password (all upper case). The car is in Berkshire, Slough area and he is looking for £3000 which i think is not bad as a car needing full restoration sold at auction in the last couple of months for £2200 ( see an earlier post). He has asked for contact by email as he does shift work, he can be contacted on d.boucher789@btinternet.com

The car has now been sold to FSCC member David Martin, i will put a progress report on here as he gets near to getting the car back on the road.
Posted by Martin Collins at 9:03 pm No comments: I recently met with Brian Waters the owner of one of only two known complete Fairthorpe Atomotas, Brian has owned the car since the mid 80`s when he bought it from Fairthorpe. AVM Don Bennett had the car as a restoration project but realising he would not get round to the rebuild agreed to sell it to Brian, a princely sum of £100 was agreed and Brian still has the receipt. The Atomota came with it`s original log book which shows the original colour to be blue but this was later changed to Rolls Royce Sand, the colour it is in now. 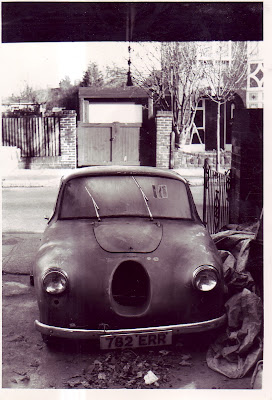 The car needs a full restoration but is mostly complete and is fitted with a 948cc Standard 10 engine with twin Su carburetters, he also purchased a complete BSA engine as fitted to some Atomota`s from Fairthorpe at the same time. Brian intends to restore the car in due course, i`m sure many of you like me look forward to seeing the car on the road again. The other known complete car is in America but it has been fitted with a Subaru engine, i hope to post some information on that car at some point in the future. The remains of a third car are known but the bodyshell was sadly scrapped some years back and whilst the FSCC holds the molds to many of the Fairthorpe models the ones for the Atomota are sadly missing presumed disposed of in one of Fairthorpes factory moves.
Posted by Martin Collins at 9:16 pm No comments: