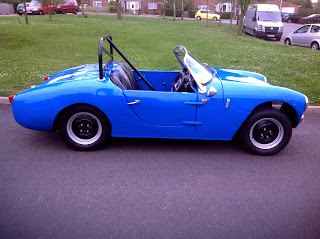 My Blue Fairthorpe EM is currently on ebay, the listing finishes tomorrow evening (25th) and I have a reserve price that is a lot less than the price that I have the car advertised on here, so if you are looking for a nice Fairthorpe that you can jump in and use now is your chance to own one at a very cheap price. You can find the listing at:-
http://www.ebay.co.uk/itm/231033753544?ssPageName=STRK:MESELX:IT&_trksid=p3984.m1555.l2649

Please read the listing carefully as the wire wheels are no longer included in the sale as they have been sold to another club member. I will be sorry to see the car go but i have 789 ERO back from the paint shop and am using that now. As readers of this blog will know my father built 789 back in 1958 and would not part with it for love nor money.
Posted by Martin Collins at 10:12 am No comments:

The Metallic Burgundy Pathfinder V8 is on ebay again, the owner has now fitted a Rover engine and gearbox and due to a health issue has decided to part with it. Here is a link to the sale..... 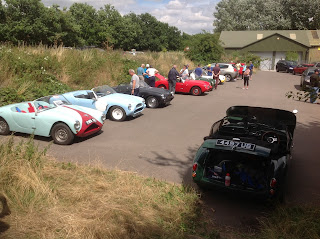 Here is a brief report on this years Fairthorpe Gathering which was held at the Museum of Berkshire Aviation at Woodley Nr Reading.  This was another successful event although Fairthorpe numbers were down on the last couple of years with 8 Fairthorpes taking part plus a `guest` Tornado, last year it was a Tempest, this year it was a very smart Talisman. Despite the smaller number of cars there were more people present this year with several ex Fairthorpe owners and a number of people who are part way through restoring their cars.
The awards this year were taken by Steve Colling with his pristine Mk2 EM who walked away (or should that be drove away!) with the best Fairthorpe award and Richard Holden went home (a very long way home!) with the furthest travelled Fairthorpe award.  Richard came all the way from Leeds,  a total of 201 miles in each direction which meant 5 hours on the road just to get to the meeting. Richard you are a real star, this on top of coming all the way down to the FSCC club stand at this years Silverstone Classic last weekend, he certainly gets around in his immaculate British Racing Green EM.

I will be posting lots of pictures and names will be named in the full report which I will get up on this site in the next few days.
Many thanks to all those that attended yesterday and I trust you will all be back for next years event...........
Posted by Martin Collins at 9:37 pm No comments:

Here is a link to the weather in the locality of Tomorrows  Fairthorpe Gathering, with no rain forecast it should be good top down motoring for those who are attending.
http://www.metoffice.gov.uk/weather/uk/se/reading_forecast_weather.html

Posted by Martin Collins at 9:16 am No comments: