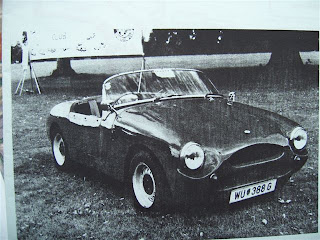 9854 PO on the cover of the FSCC magazine having been rebuilt by it`s new owner Wolfgang Buchta from Austria.

Here is the concluding part to Mike Hahn`s reminiscences of his ownership of Fairthorpes.


`The second I can remember very little about except that I bought it in Filton, Bristol and that it had a bent chassis which caused it to "corkscrew" its way along straight roads. I painted it in the Sprite Alpine caravan colour of Silver Sage because when Dad wanted to respray his caravan he ordered the quantity of paint it would have required if using cellulose....but it was coach finish and needed only about 20% of the amount Dad bought - hence quite a few things, especially Land Rovers! turned Silver Sage see some of the pictures and note that when spraying my Fairthorpe I was using my Mum's vacuum cleaner but by the time I was spraying my Dad's Land Rovers, caravan and my motor caravan I had progressed to a small compressor albeit still using an internal mix gun..


The third was a blue one bought from somewhere in South London that Brian Cocks had raced with a Ford engine fitted. I couldn't believe how the engine had been fitted - to give clearance for the larger Ford bell housing flange pieces of chassis were just cut out each side and gaping holes left!! I sold this one to Roger Goss who was an ITV cameraman at the time.


The "half" was a bodyshell bought from Berkeley in Gloucestershire which was intended to re-body the blue one. When I realised how ropey the blue one's chassis was this body ended up being burnt.


The fourth was 9854PO bought from Portishead for a serious crack at National Autotesting - I even fitted a Ford axle with a Salisbury LSD. Whilst this one had a 1296cc Herald engine it had a very early Herald gearbox with a very low 1st gear hence every forward move needed an upchange to 2nd followed by a crunch back into 1st and every reverse move was limited by valve bounce. Instead of fixing the problem I realised National Autotesting is a serious business and sold this one to Wolfgang Buchta from Vienna. 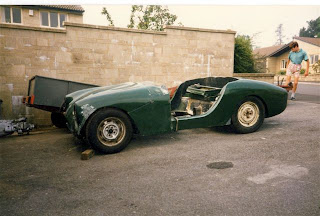 PBW 889 soon after it`s arrival
The fifth was PBW889 which I bought from Guildford. I changed the colour to red and rebuilt the chassis using Herald from suspension and the same rubber bushes in the rear radius rods. I think it already had a rack and pinion but I re-positioned it to remove bump steer. I also fitted Hillman Imp shock absorbers and springs from and back. 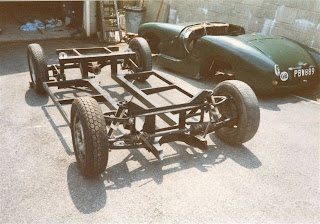 Chassis rebuilt
The engine was a 1585cc Fiat Twin Cam which was a brilliant engine and a perfect fit for a Fairthorpe. Initially I used a Fiat gearbox which was fine on the road but baulked at selecting reverse when stopped astride an A/T line. First cure was to rebuild a box with only 1st 2nd and reverse and no interlocks. This precluded road use so the second cure was to werld a Fiat bell housing to a Nissan Bluebird gearbox (the Migatronic rep who sold the TIG welder I used recommended a month's practice before starting any serious aluminium welding but I already knew I was leaving in a month so I practiced for one day and started on the gearbox on the second day! 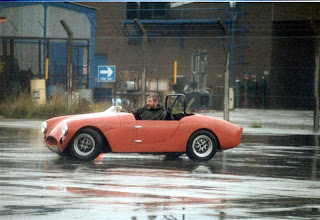 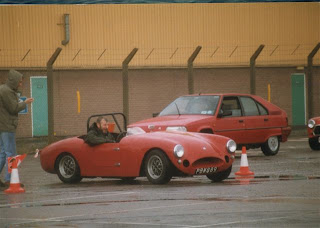 Rolls Royce Bristol Autotest in the wet
I fitted another Salisbury LSD but, whilst these are fine for spin turns going forward the cause the car to shot off at a tangent if the throttle is pressed in reverse. I had the idea of a separate brake servo for each back wheel controlled by wheelspin sensors and solenoids to apply the brake to the spinning wheel. The clever bit would have been to inhibit the system in reverse. In the event the pair of BMW 2002 servos I used weren't powerful enough and I was fast running out of enthusiasm so I sold this one to a chap who wanted to race it.` 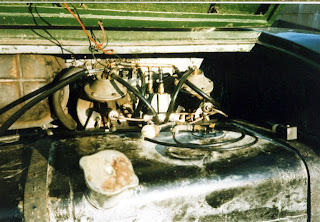 
Nissan Bluebird 5 speed box mated to the Fiat bell housing.
This car has since been converted back to a Triumph engine/gearbox, less entertaining to drive i`m sure..............
Posted by Martin Collins at 9:17 am No comments: 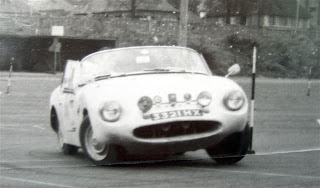 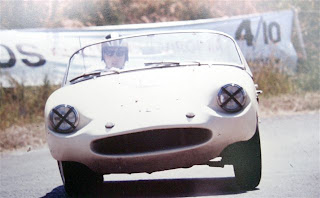 
I recently had a convesation with ex Fairthorpe owner Mike Hahn, over the years he has owned 5 1/2 Firthorpes, this is the first in a short series about Mikes Fairthorpes in his own words.

`The first was 3321HX which I bought in 1966 from a Kodak employee in Ruislip for £75. I ran it with a Standard 10 engine, then a Herald 1200 engine and finally a Triumph 2000 engine. The Herald 1200 with twin 1.5 SUs, raised compression and an SAH26 camshaft was the most successful of the three. I fitted rack and pinion steering, first 4.5J wheels then 5.5J Marcos wheels obtained during one of Marcos' fairly frequent post bankruptcy sales. After the 4.55 diff broke I fitted a Herald 4.11 diff. 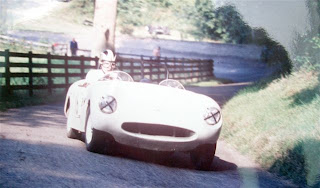 Great Auclum Hillclimb
In 1976 this one was sold to a chap who worked for Smedleys in East Anglia and bought back again in 1986 from a chap in Birmingham. I got it going again and then took it apart for the comprehensive restoration that never happened. 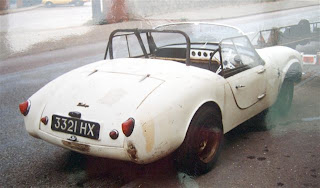 1986 as bought back
I eventually sold it via eBay at Christmas 2007 to a chap in Belgium. He chose a very windy day to collect it - the ferry took four and a half hours to get from Calais to Dover and he and his mate arrived looking very green!` 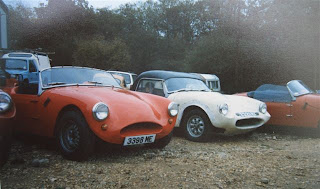 Picture of the week, Fairthorpe TX1 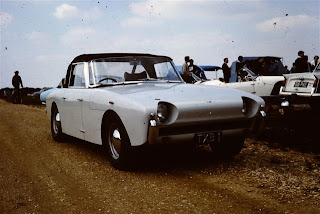 This picture was kindly sent to me by ex Fairthorpe owner Mike Hahn, it was taken in the late 60`s at Blackbushe aerodrome and shows Torix Bennet`s prototype TX1, this was the forerunner of his TX series of cars.
Mike himself owned several Fairthorpes over the years, his last one was modified to take a Fiat Twin cam engine and Nissan 5 speed gearbox and used to good effect in Autotests. There will be more information and pictures of Mike`s cars posted here in the next couple of days.
Posted by Martin Collins at 10:53 am No comments: