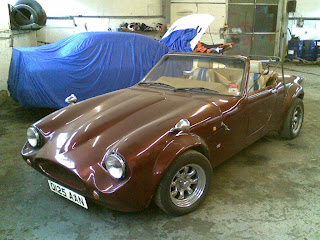 There is currently a Pathfinder V8 project for sale on ebay, it is complete except for the engine and gearbox which have been sold, it is going at a giveaway price. This car was very nicely built from the kit but now needs a good home, here is a link to the auction:-
http://cgi.ebay.co.uk/ws/eBayISAPI.dll?ViewItem&item=251281673101

I`m pleased to say the car has now found a sympathetic new owner who has previously owned a V6 engined Pathfinder and that he has joined the Fairthorpe Sports Car Club.
Posted by Martin Collins at 11:23 pm 2 comments:

Picture of the week, Fairthorpe makes flying visit to Duxford. 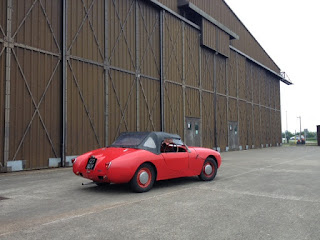 This picture was kindly sent to me by Paul Wells the owner of the pictured Fairthorpe. Paul was at the Air museum at Duxford on business and took the Fairthorpe to give it a run. The photo opportunity was too much to resist and as Paul says I`m sure the AVM would have approved. You can read more about Paul`s car in an earlier post on the blog or see the car for yourself on August 4th at this years Fairthorpe Gathering at the Museum of Berkshire Aviation. Details of the Gathering are in an earlier blog but updates will be posted nearer to the event.
Posted by Martin Collins at 4:15 pm No comments: 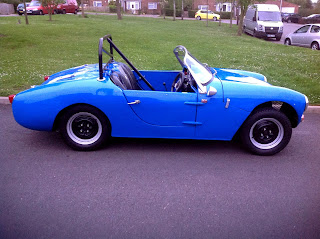 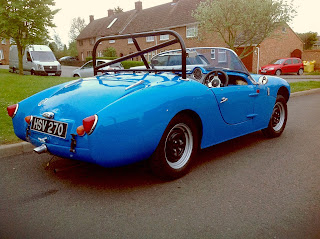 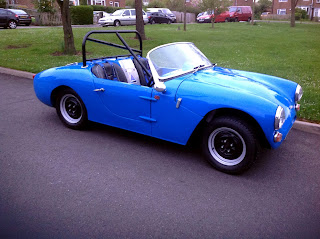 Selling due to my other EM 789 ERO finally receiving it`s long awaited coat of paint and trim,  here is your chance to buy a nice useable 1960 Fairthorpe Electron Minor Mk1. It comes with 11 months MOT and runs very nicely, it is fitted with a 1300 Triumph engine and gearbox. 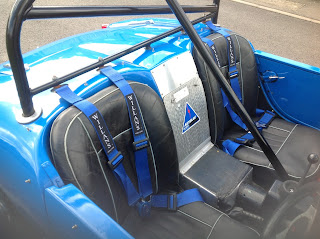 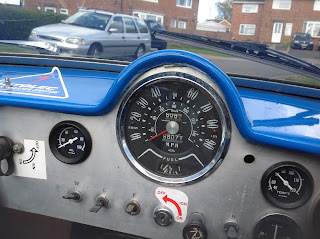 The car has previously been raced at Silverstone and taken part in the odd speed event, it has a nice roll bar, tow points and an ignition cut off switch. The paintwork is nice and bright although it does have some crazing in places, it is a very smart looking Fairthorpe which picked up the best Marque car award at the recent Fairthorpe Sports Car Club AGM. There is also a tonneu cover to keep the inside dry when it is parked outside. 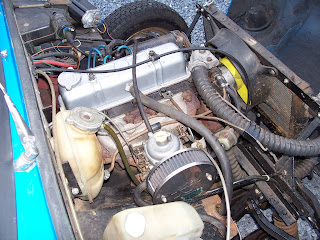 Asking price is £5200 ono which includes a years membership of  the Fairthorpe Sports Car Club, i can be contacted on 07952 930042 or by email at kartman.nascar24@btinternet.com

Posted by Martin Collins at 10:24 pm No comments: 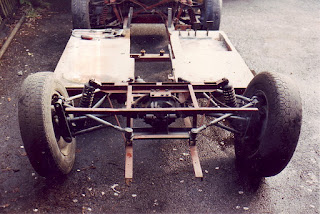 I thought I would post these pictures of the independent rear suspension set up as used on Electron Minors. This was offered as an option to the live axle from 1960 on Mk2 EM`s onwards, it uses the Herald diff/ driveshafts and hubs with Fairthorpe designed arms and coil over shock absorbers instead of the Triumph transverse leaf spring. The Fairthorpe arms were connected to the chassis with Triumph trackrod ends to allow for the movement of the arms as the suspension went up and down. The independent rear end gave a more comfortable ride over uneven roads but suffered from the dreaded wheel tuck under on hard cornering, it was an improvement on the Triumph set up but if you were going racing the live axle was the way to go. The second picture shows a lot of negative camber on the wheels as it had been on a jack, one it had the weight of the body and engine/gearbox in it and it was rolled forwards they moved into a near vertical position. This chassis was from an EM i rebuilt many years ago, i converted it to a live axle set up as i was going racing with it.
Posted by Martin Collins at 9:19 pm No comments: 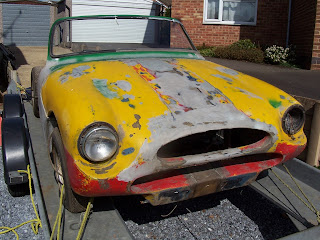 I have a Mk2 Electron Minor bonnet for sale, it has been widened by 4" and would need this piece removing and the two halves re glassing together. A bit of work but it would make a cheap replacement bonnet for someone with the time to do it. It comes complete with it`s nose frame, price is £25, contact me at kartman.nascar24@btinternet.com  if you are interested.
Posted by Martin Collins at 6:00 am No comments:

I have had a request for a clearer copy of the wiring colours for the loom on Electron Minors, the copy I put up on the blog a while back was a scan from an original supplied with a kit so is a few years old now and a bit faded. This one has been re typed at some time so is a bit more legible.
If you have any requests for information on anything to do with Fairthorpes drop me a line and I will see what I can do. 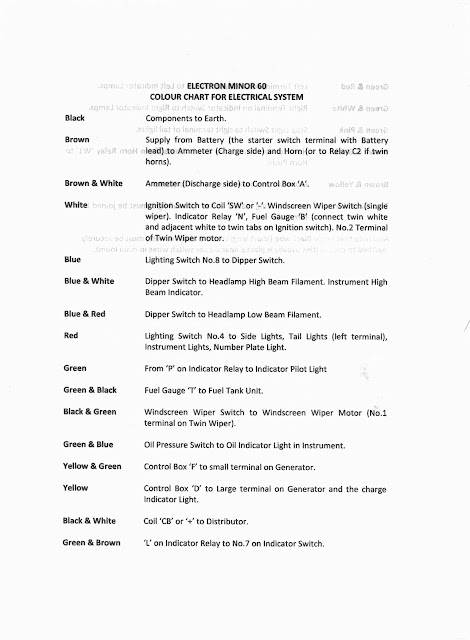 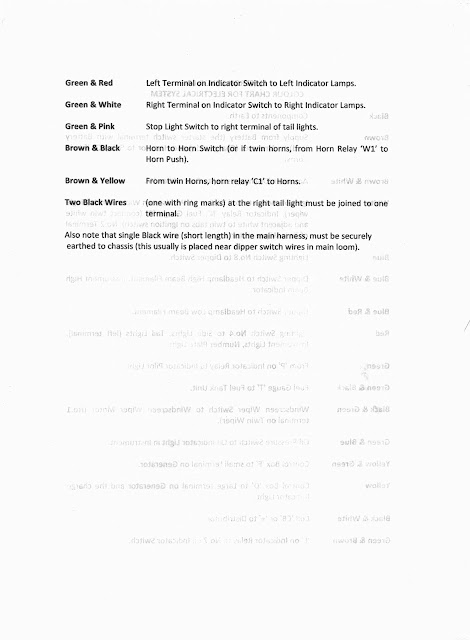 Posted by Martin Collins at 5:11 pm No comments:

Three Fairthorpes out to play at kit car show. 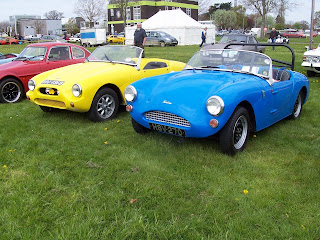 I spent a pleasant day today at the Stonleigh kit car show in Warwickshire, it was the first time I had been there in over 20 years. My father Frank and I had exhibited at the show over a period of 4 years when we were rebuilding Fairthorpes and producing the Fairthorpe Pathfinder kit cars. It bought back memories of happy times spent working with Frank bringing Fairthorpes back to life and developing the Pathfinder. 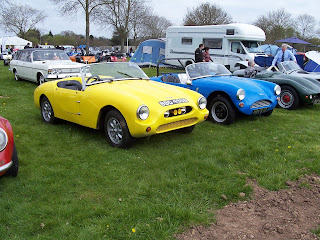 I travelled up in one of my Electron Minors, following fellow FSCC member Rob James in his yellow EM nicknamed `May`. My EM was purchased in September last year needing some work as it had been off the road for nine years. It had the usual problems suffered by a vehicle that has been laid up, requiring brake and clutch cylinder work, new front brake shoes and wheel cylinders etc. The Stromberg carb required a strip and service and a non standard handbrake cable arrangement had been fitted which simply didn`t work, this has been replaced with the correct set up. As usual with Fairthorpes the first thing to go chassis wise are the rear box section outriggers, i had new sections folded up and I cut the repair sections from these and welded them on.

Having wandered round the halls and purchased a few parts Rob had to head for home, he had only been gone 5 minuets when another Fairthorpe arrived to take his vacant parking spot. The new arrival was Richard Holden with  his immaculate Mk1 EM, his car is a credit to the marque inside and out. 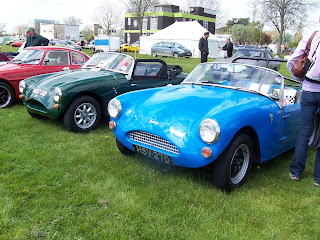 789 ERO my other EM is hopefully having the bodywork finished off in the next month or so in readiness for a nice new paint job, once that has been completed it will be back on the road again.
Posted by Martin Collins at 10:56 pm No comments: