This years Gathering is almost here, August 5th at the famous World War Two Battle of Britain fighter station North Weald. The airfield was established in 1912 during the First World War by the Royal Flying Corps and during the Second World War Squadrons based from here flew Hurricanes, Blenheims and also two American Eagle squadrons who flew Spitfires. After the war the airfield became the base for Gloster Meteors and De Havilland Vampires, the last RAF aircraft were the Hawker Hunters, the RAF display team the Black Arrows, famous for their 22 aircraft loop also flew from here. The RAF withdrew from North Weald in 1964 and for a number of years it was used by the Army and Navy before being turned over for civilian use in 1979.
Nowadays the airfield is home to a number of of Flyable Historic aircraft including Spitfires, Hurricanes, Mustangs, Vampires, Gnats and many more interesting types, these can be seen flying on many days during the year so hopefully we may see something interesting in the air.  We will spend the morning at the Squadron NAAFI cafe which opens at 8am, i gather they do a very nice English breakfast etc and the Squadron bar is next door for those who want something stronger to drink. They are allowing us to park the Fairthorpes in one of the Wartime aircraft blast pens which will provide a great photo opportunity and there is plenty of parking outside the pen for other vehicles. The aircraft frequently taxi right past the NAAFI so plenty to see. At 1pm we will convoy the cars around the perimeter track to the former Station Gate house which is now the airfield museum, (Number 2 on the picture attached) after people have had a wander round we will be presenting our usual awards for the best Fairthorpe and the Furthest traveled Fairthorpe. Our past Gatherings in Essex have quite often been the best attended so hopefully this year will again see a good turn out of Fairthorpes, (all club members and cars welcome).
North Weald Aerodrome is just off Junction 7 of the M11 motorway (2 miles away) and so road access to the M25 and north east London is excellent. Immediate access to the airfield is via the A414, with Chelmsford less than 20 miles to the east and Harlow a short distance to the west. For detailed mapping, try looking on Google Maps.
Once at the airfield entry gate let the security know you are visiting the Squadron NAAFI, follow the perimeter track Clockwise noting the speed limit, obey any STOP signs as you will be crossing the end of two active runways on your way round. You will pass the Wings cafe on your left, we are not there but further on at the Squadron, (number 1 on the picture in this magazine). 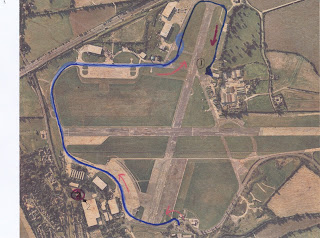 SatNav info
Postcode CM16 6AR, PLEASE NOTE, this does not take you directly to the entrance, follow the signs for North Weald Market and this will take you straight to the airfield. Once off the A414 from the small roundabout follow the road around the outside of the aerodrome which will lead you to the main entrance. There will be only 1 gate open on the day, next to the Air Traffic Control Tower, this is the airfield main entrance where the blue line starts on the airfield picture. I will en-devour to put some small Fairthorpe signs up on the day.
Look forward to meeting up with many of you on the day..............
Martin
Posted by Martin Collins at 11:29 pm No comments:

Another Fairthorpe returns to the road for the first time in 30 years. 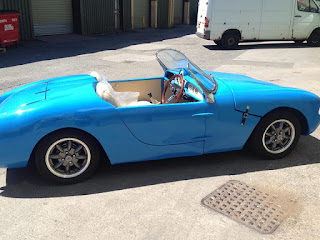 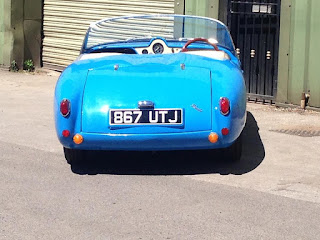 Stuart Coupe has recently completed the restoration of his Mk2 Electron Minor which was last on the road over 30 years ago. As you can see from the pictures he has made a very nice job of it. The car has an interesting history and was featured in a film made a number of years ago which can be found here:-
https://www.youtube.com/watch?v=lkI65UZSbek 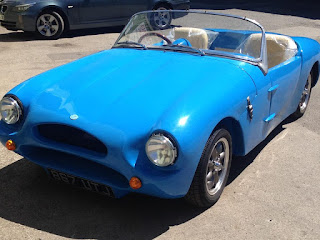 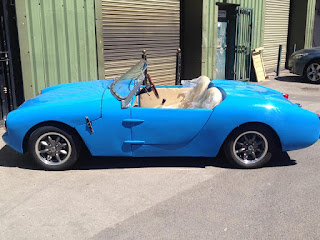 Posted by Martin Collins at 11:25 pm No comments:

Original builder ready for the road again with his 1958 Electron Minor. 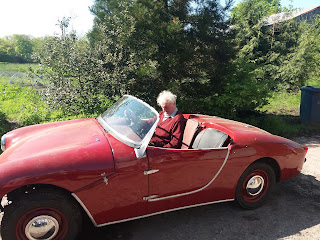 Barrie Pattinson bought his Fairthorpe Electron Minor kit in May 1958 as you will see from the invoices, It was first registered in August 1958, Barrie still owns it to this day and his son Ed has rebuilt the car to the look as it did when it first was on the road. (the original bonnet was the triangular mouth which they still have but it is in poor shape.)
He drove it from 1958 to 1968 when he put it into a small, black, corrugated tin sheet shed where it remained till December 1998. The shed is 15 yards below Barrie`s lorry workshop in Leigh, Staffordshire where it was built originally. It was removed from the shed because local children from the village of Leigh were breaking in to play in the car.
Slowly (Really very slowly, because other matters have taken priority) Ed has worked on the car to bring it back to the state you see it in now. 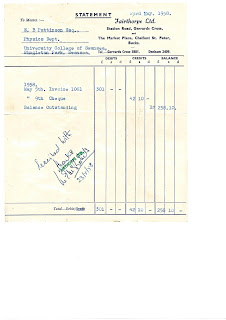 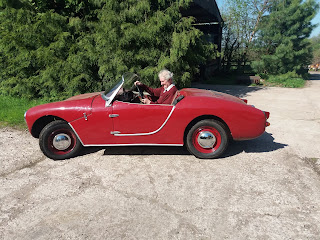 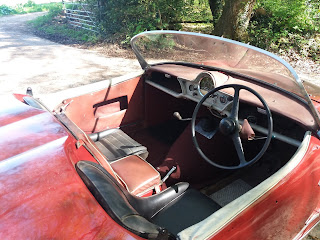 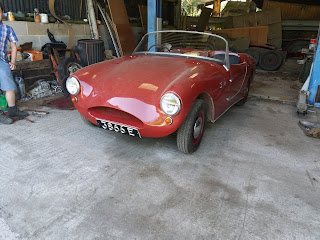 Posted by Martin Collins at 11:11 pm No comments: