A brief history of Fairthorpe 789 ERO 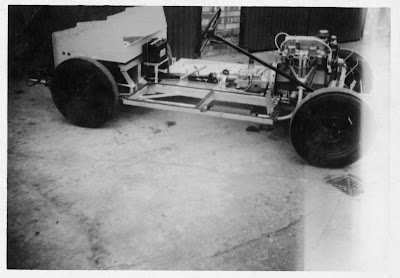 What type of Fairthorpe is 789 ERO?
789 ERO is an early 3-seater Fairthorpe Electron Minor mk1 (colour: 'gelcoat' blue with a crimson racing stripe) manufactured in kit form in 1958.

Frank Collins, my father, bought the kit in October 1958 for £425 - around £7,400 in today's money - and it was delivered to his rented lock-up on the 11th October. In those days, buying the car in kit form saved a considerable amount of money in 'purchase tax' - the precursor to VAT - and was an important consideration to cash-strapped car fanatics like Frank.

He spent just one month (yes that's right! 30 days!) building it in a garage with no power or light. He wore out three hand braces just drilling the chassis holes. 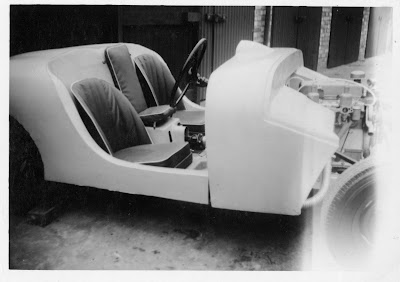 It was registered 18th November 1958 with an expertly painted rear registration number in blue and white Dulux! At a later date, a proper metal plate was fitted. 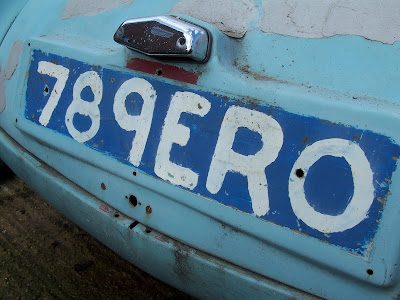 It became his everyday car, getting him to work and back during the week, but it was at the weekends that the car was really put through its paces. As both part of the original Fairthorpe Work's team with John Green and Peter Butt and as as a sole competitor, Frank raced 789 at national racing circuits such as Silverstone, Brands Hatch and Mallory Park. He competed and won against some of the best drivers in his class including Fairthorpe Car's Founder Air Vice Marshall Don Bennett (of wartime Pathfinder fame).

Fairthorpes do enjoy La Dolce Vita
In 1959, 789 proved its stuff once more by taking Frank and his new bride Audrey to Italy on their honeymoon, driving across France, through the alps and down to the east coast of Italy to Diano Marina. Despite the rarity of the cars, it was shock for Frank and Audrey to see another Fairthorpe coming in the opposite direction while driving along one day and they grabbed the chance for a photo op and a natter.

When I came along in 1961, I was promptly parked into the little middle seat (note the lack of seatbelts!!). In fact when I wouldn't sleep at night and was making a hell of a racket, Frank would put me into the car and thrash up the A41 until I fell asleep.

But when baby number 2 appeared - my brother Graham - in March 1963 it was clear that the car was no longer practical for a growing family and was sold in July 1964. That was the last we would see of 789 for 23 years.

A chance discovery
In 1987, I was rebuilding classic sportscars, including Fairthorpes, in partnership with my father down in Denham. Then by chance one day, while at a kit car show in Bingley Hall Staffordshire, a chap came up to us on the stand and looked over a restored Fairthorpe we had just completed. He mentioned that he had one of them in his garage. I used to keep a record of surviving Fairthorpe registration numbers and asked him what his was so I could update my records. He couldn't remember the letters, but could remember the numbers; 789. I was shocked and surprised. "It's not 789 ERO is it?" I asked. It was his turn to look shocked. "How did you know that?"

Straight away I asked him if would sell it to me, but he refused. He had bought the car as a retirement project for his father so I took his phone number then every few months rang and pestered him. Finally, nearly 18 months later, he gave in and offered to sell the car to me WITHOUT the registration number. He'd had it valued at £750 and was hoping to get more money. No deal. I wanted the car AND the registration number. And for a hell of a lot less than he was asking.

It was a further six months before I persuaded him to sell the car and the registration plate together for a reasonable price.

The return of 789
So on 27th May 1989, Frank and I drove to Liverpool on a Bank Holiday Saturday during some of the worst traffic we'd ever had the misfortune to be stuck in. We were amazed to find that the period modifications that Frank had made were still on the car, including two household rubber doorsteps that were fitted to the back of the bonnet to increase the throughflow of air round the engine when racing. It had also acquired a name: Little Nero. 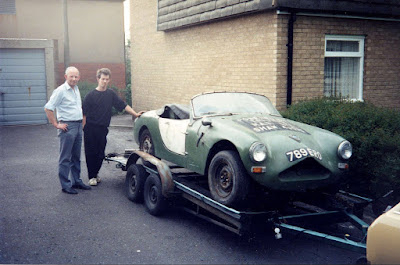 Little Nero had been repainted Triumph Apple Green and, through a quirk of fate, the previous owner had masked up the metal number plate rather than remove it for respraying, thereby preserving the original Dulux number. On the bonnet was a large black panel with the contact details of a car accessory shop, which we later found out was painted on by the owner of the shop as advertising when he raced and auto-tested the car.

The wrecking crew get to work
I began the restoration almost immediately, cutting out the rotten outriggers and side rails of the chassis and rebushing the rear suspension. The car had been modified at the front and the original Standard 10 front suspension had been removed and replaced with that from a later Triumph Spitfire. This was cut off and an original Fairthorpe/Standard 10 set up refitted. I added a set of Ford engine mounts so I could race it with a Ford engine.

Then life intervened. Work changes. House moves. Marriage. Little Nero stood outside and deteriorated under a sheet. It was a further 20 years before I went back to complete what I had started.
Posted by Martin Collins at 9:50 pm 2 comments: