Video of the Fairthrope Gathering at Stow Maries Aerodrome

It's taken a while to get it together but it's here! This is a very high resolution version of the movie which took almost 19 hours to upload to YouTube. In the meantime Sarah uploaded a low resolution version for those who couldn't wait (15 people couldn't and had viewed it today!) but she has now removed that and replaced it with this version.

If you were one of the people who watched the low-res version, take a few moments to see the high-res version as well. It really is well worth it.

Posted by Martin Collins at 8:55 pm No comments:

Having had torrential rain and thunderstorms on Saturday, we were thankfully blessed with reasonably warm but windy conditions for the 2nd annual Fairthorpe Gathering at Stow Maries Aerodrome in Essex. 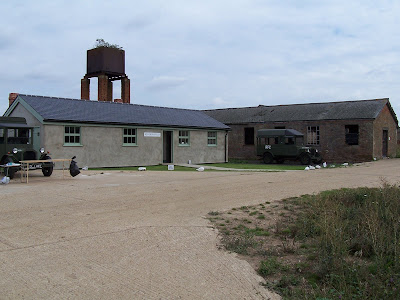 The aerodrome dates from WW1 but fell into disrepair once the Royal Flying Corps left after the fighting stopped. Russell Savory bought the derelict site several years ago and is now restoring it back to its glory days. Russell started by giving us an overview of the aerodrome's history and plans for its future, followed by a guided tour round the numerous buildings and explanations of their previous uses. Then all the petrolheads piled into Russell's business workshop (RS Performance) for a guided tour of the premises, which houses a number of highly tuned V6 and V8 engines currently being fitted into high performance cars for his customers.

Now, I guess most of you visiting this site want to hear about and see some pictures of Fairthorpes. Hopefully those of you that own ine in bits will be spurred on to get them out of hiding and on the road in time for next year's event!

We had an excellent turnout of twelve cars comprising: 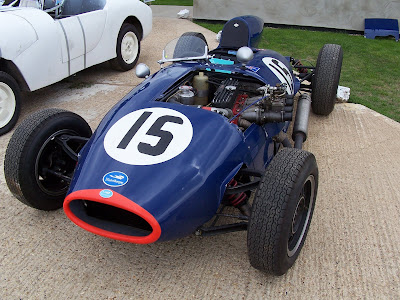 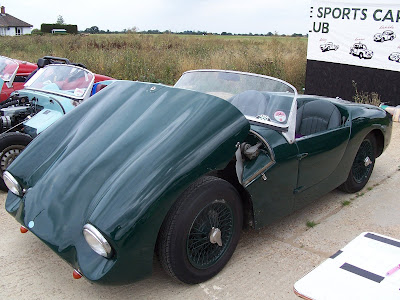 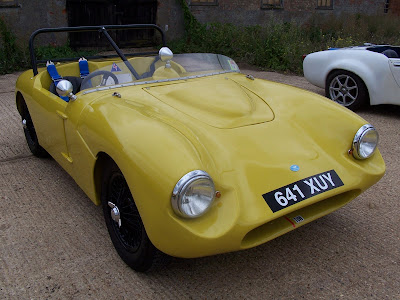 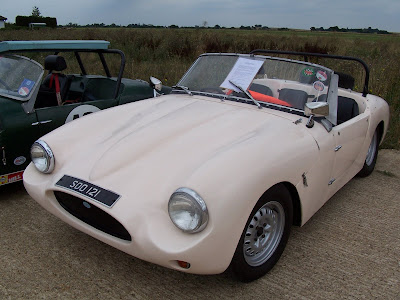 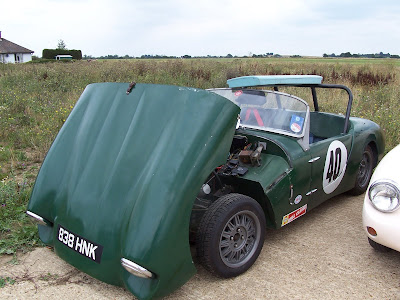 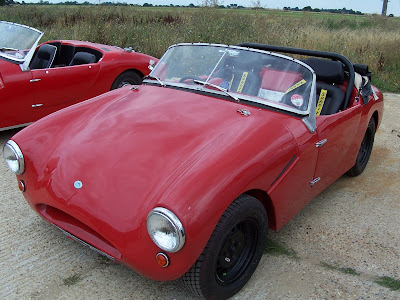 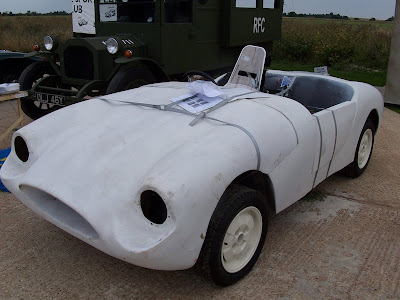 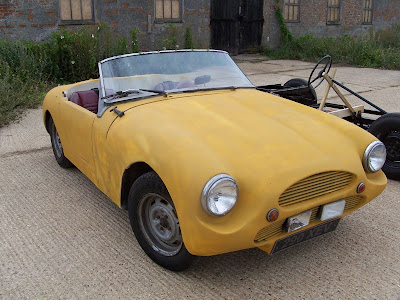 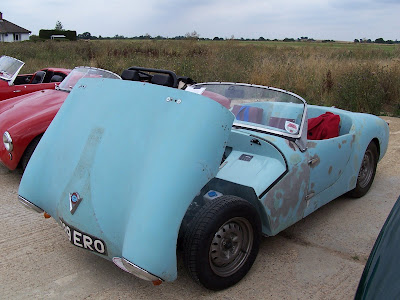 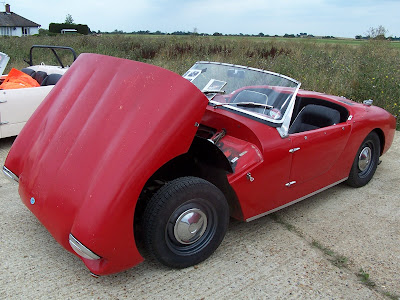 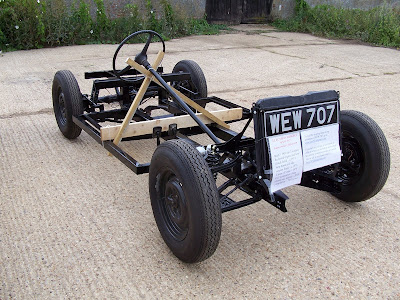 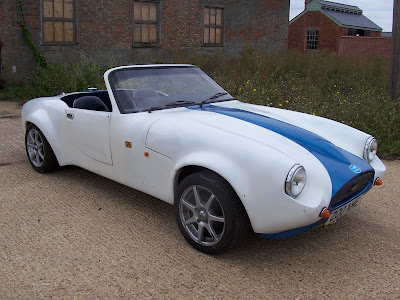 Several of the cars were immaculately presented, some were running restorations (mine included!) and special mention must go to Brian Townsend whose ground-up rebuild was there in its rolling chassis stage to show everyone what they are like `with their clothes off!'

A Ginetta G21 and a Jowett Jupiter also turned up, both driven by Fairthorpe fans. 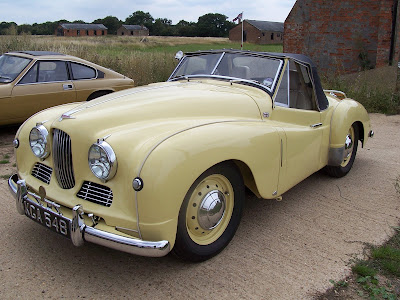 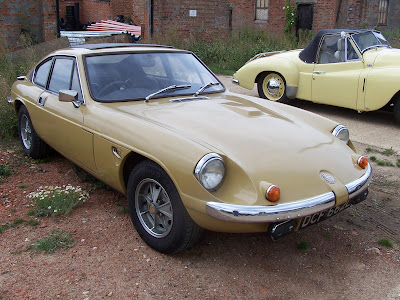 The press turned up from Classic Car Weekly... 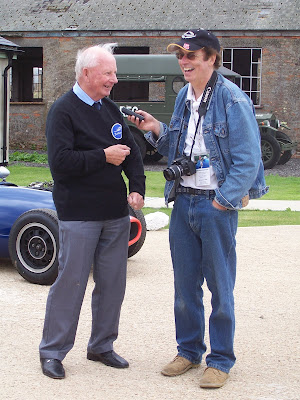 The day wouldn't have been complete without awards though. Best Fairthorpe was won by Rob Cobden`s Electron which he recently finished rebuilding ready for next season's historic racing campaign. The other award was for the furthest travelled Fairthorpe, which was hotly contested with three cars coming over 100 miles and all travelling within a total of 10 miles of one another! Rob walked away with that trophy as well. Rumours of him doing two laps of the airfield earlier in the day to bump the mileage up were unfounded!

The day was rounded up by Ron Welsh doing a couple of fast passes in a wheel spinning Junior past the 10 mile an hour signs....tune in later this week for the video of that.

Everyone was kept very well fed during the day with complimentary ham rolls, home-baked cakes, biscuits, and teas and coffees. Several of the cars were leaning noticably as they left at the end of the day due to the occupants' full stomachs (I would like to thank my lovely wife Sarah for the amazing effort that she put in to preparing the feast, it certainly went down well).

More pictures and some movies will be downloaded to the site over the next few days. and if you have any you would like to see featured on the blog please send them to me and I will put them up.

Now: next year's 3rd Annual Fairthorpe gathering will be on a similar date in August somewhere in the midlands to encourage some of the FSCC's more Northern UK owners to participate.

If you have a car in bits, there's no more perfect incentive to finish it up ready for its unveiling to club members next year. So go get stuck in!

Posted by Martin Collins at 10:15 pm No comments:

[he heaves a sigh of relief - 789 ERO has no wet weather gear yet]
Posted by Martin Collins at 9:40 pm No comments:

One week to go until this year's Fairthorpe Gathering at Stow Maries WWI Aerodrome in Essex. The event is open to all Fairthorpe fans, not just owners, so if you have one, had one or want one this event is for you!
At least 13 Fairthorpes are expected on the day, including several racing Electron Minors, the one-off Fairthorpe Formula Junior, a racing climax-engined Electron, and a pair of Pathfinder V8s.

Owner Russell Savory is doing some amazing restoration work of the airfield and has offered to include a guided tour of it as well as a tour of the R S Performance workshops, which house many V6- and V8-engined high performance sportscars.
The postcode for the airfield if CM3 6RN if you need it for your SatNav and cars will be arriving from 10am. If you need any further information contact me on kartman.nascar24@btinternet.com. There'll be refreshments available to keep you going and prizes for the best-looking Fairthorpe and the furthest traveled Fairthorpe.
Full pictures and report will be posted the week after the event.
Posted by Martin Collins at 10:21 pm No comments:

Many thanks to Turner Registrar Russ Filby, who alerted me to this Fairthorpe film on the British Pathe site (http://www.britishpathe.co.uk/) - Don Bennett and friends putting together and test-driving an early Atom.

You can tell it is an early Atom because the headlights are on top of the wings and later Atoms had them built into the wings.

Posted by Martin Collins at 9:02 pm No comments:

Sarah shot these videos while at the 60th Anniversary event at Castle Combe on Sunday. We were on our way out to do a couple of parade laps during lunchtime. Frank is driving. Also shown in the video are Turners and a Tornado.


And here they are all coming back.

Posted by Martin Collins at 8:53 pm No comments: 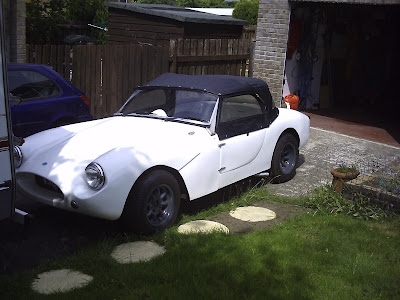 In the Fairthorpe Sports Car Club magazine this month Chris Jones is advertising his Electron Minor mkII. If you don't get the magazine, here's a few words about the handsome beast (the car that is not Chris):
£3,500