In the latest issue of Classic & Sports Car magazine is a piece on the Fairthorpe Electrina 423 NDV which i bought from the original owner Frank Oak earlier this year. The item is in the `Lost & Found` section of the magazine. More details on the car plus pictures can be found in an earlier post on this blog.
Posted by Martin Collins at 6:37 pm No comments:

The return of Frank the Fairthorpe! 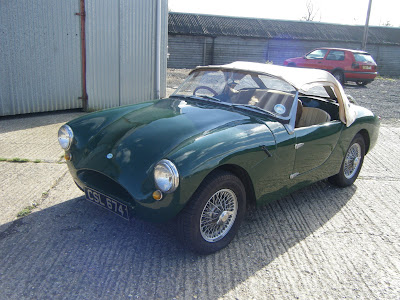 I had a call recently from Bob Balding to say he was thinking of purchasing a mk1 EM and wanted to chat about Fairthorpes, i`m pleased to say a week later he called back to confirm he was the new owner of the car. It is a 1960 EM which has had an age related plate fitted, CSL 674 has a Dolomite 1300cc engine with a single S.U carb on it. It is British Racing Green and fitted with a nice hood and has a beige leather interior (yes i did say leather) so someone has spent some money on the car in the past. Having dug around in the depths of the F.S.C.C Fairthorpe records i managed to match the chassis number with the cars original registration number which was 349 PRA. This car and i have crossed paths in the past, my father Frank and i purchased the low mileage car from it`s original owner 20 odd years ago at which point it was sprayed an old English white with red trim and hood. 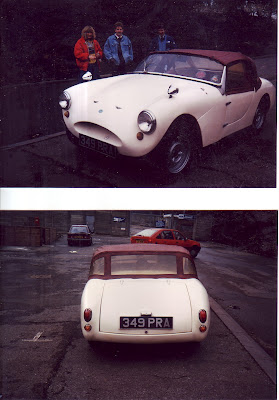 The car was bought from us by Denise Howe, she is pictured here having just bought the Fairthorpe and promptly named it Frank!

We lost track of the car after that but i have seen pictures of the car later painted in BRG still with it`s original number, this picture was taken at the Specials day at Burford Wildlife park, hmm ditch those wheel trims....... 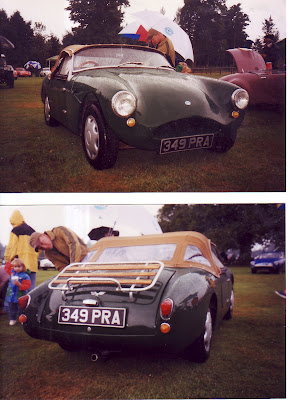 The car is now fitted with wire wheels, Bob would have liked to reunite the car with it`s original number but an RAC data check reveals it is now on a BMW Z4 (sacrilege!) Once the spring arrives he hopes to be attending club events in the EM and is not that far from our Sunday meets at the Greyhound Pub in Northampton, making the sight of five or six Fairthorpes in the car park a distinct possibility.
Posted by Martin Collins at 8:36 pm No comments: 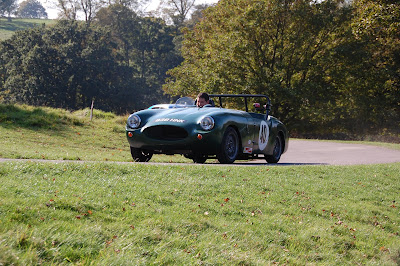 On October 6th a Spirit of the 60`s event was organised at Dyrham Park, this was a venue for Hillclimb events during the 1960`s and various clubs catering for cars of the type that would have competed in period were invited to attend for a parade up the old hill circuit. Chris Gale took part in his Green Electron Minor and his car certainly looks every inch a racer with the screen off, Chris has done a bit of competing in the car in the past and it would be great to see it run in anger again, how about it Chris?

There is a chance for a bit of gentle competition for those of you wanting to see what your Fairthorpes are capable of, each May some of the Fairthorpe Sports Car Club members take their cars to the Prescott Hill climb. The event is open for those that just wish to take part in a parade up the hill or timed runs are available for those who want to throw their cars about a bit. I will post more details nearer to the event.
Posted by Martin Collins at 9:10 pm No comments: 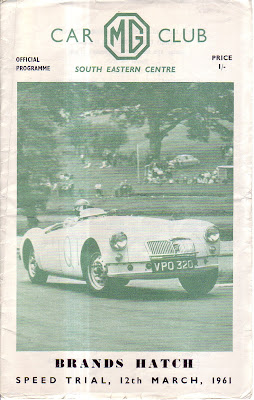 I have been loaned an MG Car Club race programme for the Brands Hatch Speed Trial which took place on 12th March 1961. Brian Gent kindly contacted me with details of it as in class F were a certain Miss N. Bennett and her brother T. Bennett in Fairthorpes running numbers 46 and 47. Having spoken to Noreen on the phone she had no recollection of their placings on the day but recalls those days racing the cars as great fun. 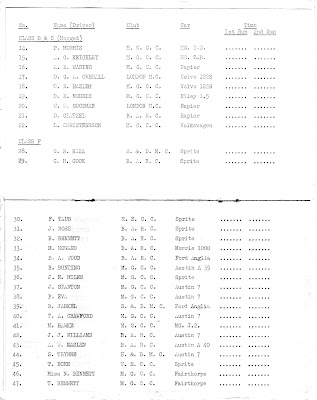 I have scanned the cover and entry listing for them, Brian has also turned up another Fairthorpe in competition, it was at the Valence Hill Climb, Valence School, Nr. Westerham, Kent on 13th July 1974. The event was held by The Sevenoaks & District Motor Club, the car ran in Class C - Modified Sports Cars up to 1300 c.c. it was driven by Martin Brazil and was car number 46, it was described as a Fairthorpe Electron Minor. The programme stated that he was a member of The Gilbern Owners Club. Does anyone know or know of Martin Brazil or have any further details of his EM?
Posted by Martin Collins at 8:44 pm No comments:

TX Tripper for sale on ebay with Mot, ready to drive away. 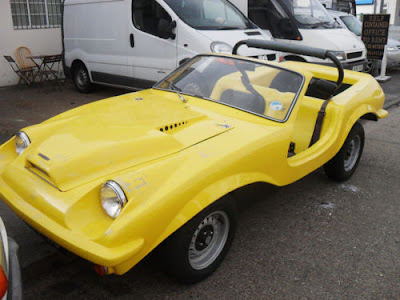 There is a TX Tripper currently listed on ebay, the car looks quite nice and has a current MOT and is tax exempt. It is fitted with a twin carb Triumph 1300 engine and the starting price is very reasonable at £1000. Here is the link:- http://www.ebay.com/itm/ws/eBayISAPI.dll?ViewItem&item=120792404388&ssPageName=ADME:B:SS:US:1123

I would appreciate it if someone who is reading this buys the car could you let me know so i can add the ownership details to my Fairthorpe club records.
Posted by Martin Collins at 2:43 pm No comments: