This years Fairthorpe Gathering is nearly here it is on 7th August at the Donington Park Museum, Castle Donington, Derby, DE74 2RP. The museum is close to J23a of the M1 and is accessed by the A453. Entry to the Fairthorpe Gathering is FREE and there will be refreshments and snacks provided free of charge to those attending, my wife Sarah will be baking some more of her delicious Fairythorpe cakes which went like Errr.........hot cakes last year! There will be trophies presented for the best Fairthorpe at the event (voted for by those attending) and also the furthest distance travelled to the event with a Fairthorpe.
We have negotiated a discount of £2 over the normal admission price to the Grand Prix Collection so admission to the museum will now be £6 for those attending the event.
`The Donington Grand Prix Museum houses the largest collection of McLaren and Williams racing cars in the world (outside of their respective factories), and the only complete collection of Vanwalls. A notable exhibit is Stirling Moss's Lotus in which he defeated the might of the Ferrari Works Team in the 1961 Monaco Grand Prix.`
More information on the museum can be found at http://www.donington-park.co.uk/pages/motorsport-museum.html there is also an excellent cafeteria on site if you want something more substantial to eat.
We will be arriving from 9.30am onwards and have a designated parking area to put the Fairthorpes, last years event had 13 cars in attendance, i am hoping for 15 this year. If you have a Fairthorpe or are just interested in them please come along and join in, the more the merrier. We have 13 cars attending so far although that will be dependant on the weather so i have fingers crossed for a dry day!
Posted by Martin Collins at 8:22 pm No comments:

Electron Minor up for auction

I have been tipped off by Dave Malins the Tornado Registrar that there is a Fairthorpe Electron Minor mk1 up for auction tomorrow (20th July) at H&H Auctions. The EM was previously held by a museum and looks to be fairly complete and is fitted with a 948cc Standard 10 engine. If you are after a rebuild project this could go at the right price.

The Electron Minor sold for £2200, hopefully the new owner will contact myself or the club so we can help with advice or parts for the rebuild.
Posted by Martin Collins at 11:14 pm No comments: 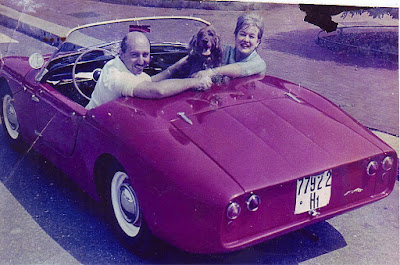 This week i have a couple of interesting pictures for you to enjoy, the first of these was taken in Genova, Italy in the early 60`s. There was a Fairthorpe dealer appointed in the area and he had a new tail designed for his cars, one of which is shown in this picture. I am not aware of how many cars were built with these and have no knowledge of any of them surviving. If anyone in Italy reading this fancies a bit of detective work here is your opportunity, i think there are at least 2 Fairthorpes there with the conventional rear bodywork. Below is a scan of the front of the agents brochure. 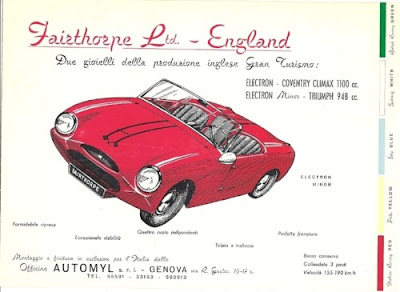 The second picture was taken in February 1986 at the CCH Sprint at Brands Hatch, my Father Frank (pictured with the car) and i had rebuilt this EM1 with a Ford Escort axle with a limited slip diff, a 160bhp Race tuned Lotus Twin Cam and 5 speed gearbox and as you can imagine it was VERY impressive to drive. Unfortunately we arrived too late to practice due to the snow and a steep slope out of our workshop! So we were therefore a non starter, no harm in unloading it from the trailer and giving it a run round the paddock! A couple of months later we took it to Silverstone for the 8 Clubs race meeting again arriving late for practice (i see a pattern here!) but due to a friend being clerk of the course i did a couple of practice laps behind the pace car (thanks Ken ;¬) 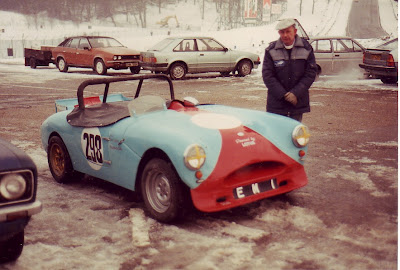 I had a great dice during the race with someone in a hot 2.8i Capri, i`d out brake him and pull away through the corners and under acceleration but he would be on my tail again at the end of the straights. Alas it was over all too soon, after 3 laps the large oil warning light flicked on and a glance at the pressure gauge showed the needle rapidly descending towards zero so i switched the engine off and coasted to a halt on the grass on the exit of Copse corner. The cause was diagnosed as a broken cam bucket and with metal all round the inside of the engine an expensive rebuild was on the cards.............money we unfortunately didn`t have at the time, a familiar story for many would be racers. We had someone who was interested in the car so we resprayed it to their choice of colour which was British Racing Green and fitted it with a tuned 1600 Ford x-flow engine with twin 40 Weber carbs, still a potent machine but a bit more reliable for the road.
Posted by Martin Collins at 8:46 pm No comments: