The Tale of Electron Minor Mk11 BBD 496B 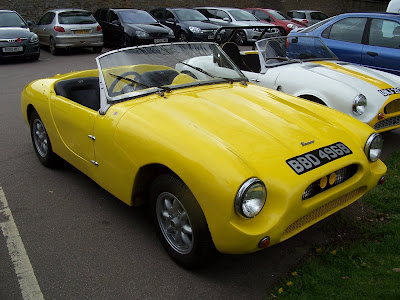 Rob James has recently aquired a Fairthorpe locally, here is the tale in Rob`s words.

`Some 4 years ago I was working locally in a farmyard full of Barn Conversions and got chatting to the farmer who was working away in the workshop you would die for(you know ,pit, lathe, benches etc 30x20) and it came to pass that his sister May had an EM in her barn which was a family heirloom it having been built in 1963 by her brother John Thompson, John having died rather tragically at the age of 54 some years before. So I ended up going to see the car to take some photos and details for the then registrar Willy Simpson. So out of the barn we pushed this lovely Yellow EM with a twin vent front and Minilite look-alikes looking just like a time warp. After the visit I reported it to Willy and wrote to May thanking her for letting me see it. Since then the car has featured as my screen saver. Health and other things have not been so good the last couple of years, so, to cheer me up one day I thought looking fondly at the screen saver I must write to May again and touch base. So I did so and was surprised when a couple of days later I had a call from May, after a brief chat I made arrangements to call and see her.

Well there she was under a sheet in the new barn, the old one having collapsed under the weight of the snow a year ago and slightly damaging the EM and Mays BMW. Looking only slightly sorry for herself having been kept outside for the first time in nearly 50 years last summer while the new barn was built, unfortunately the paint suffered from being under a plastic sheet and has bubbled up so, a re-spray in the future but hey! I am now the owner/custodian of BBD 496B. We picked her up a few days later and she in now safely in my fathers garage.

Work done so far.
Fixed the wiring on the lights, now 100% with not even a bulb gone. Rewired the horn, new battery, checked and adjusted the brakes with not even a seized adjuster (drum brakes all round) She started after about 5 mins trying but the carbs were all over the place so my brother has set them up to find we still have this infuriating miss-fire which we have narrowed down to the leads so today I am replacing the lot, coil ,dizzy cap, points, leads and plugs. The O/S screen pillar had snapped when the barn collapsed so I effected a repair by putting an aluminium strap behind the split and a dome bolt either side through to the strap at the back looks neat. Martin Collins very kindly had a air box (need a bit of fibre glass work to fit) and a rear light lens which were the only bits missing. Needs new screen to scuttle rubber seal and some door rubbers but I will get them at the kit car show in May.` 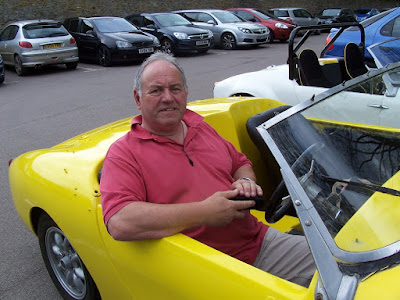 Rob now has an MOT on the Fairthorpe and he bought the car to last weekends Fairthorpe Sports Car Club Noggin & Natter in Northampton, joining my car 789 ERO and the recently restored UNJ203 of Brian Jackson (see an earlier post). 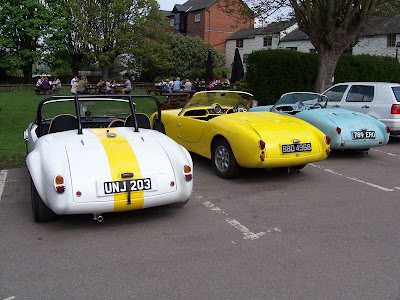 Rob now has a few miles under his belt in the car and today i received the following update.

So Mot first time not even a brake pipe gone. Taxed that very day, followed by the first outing 10 miles show the family you know the type of thing, only event was a light surround fell off but safely retrieved. Second outing Sunday 3 point turn reversed into low kerb bent and split the exhaust, what fun, always have a piece of wire in the boot by the way got home all but very noisy. Needs new front pipe and back pipe with the cherry bomb surviving, found a great place that makes industrial exhausts made me a new front pipe and rear pipe all bent and welded £40 2 days RESULT.

Noggin and natter at Milton Malsor next outing bit nervous as it was 10 miles from home, Day before, fuel line T piece decides to leak with vengeance could I find a spares shop on a sat pm with a ¼’’ T piece so its Martin to the rescue again, pointed me to the best old school spares shop I have seen for a long time called Westalls in Towcester £2 job done ready for next day. Trip to pub non eventful and thoroughly enjoyed it met some fellow members compared notes etc, nice lunch by the way.

So now got quite a list of bits needed, screen bottom rubber, door seals, boot seals, new engine mountings, hoses, door stop rubbers, Importantly TEMP GAUGE (if you have a spare one give me a call) However Kit Car Show at Stoneliegh in a couple of weeks nearly 40 miles each way not sure whether to go in “May” or not its along way when she has only done 50 miles in the last 15 years

Well, Bank Holiday looms and the weather has been great for open top motoring, after far too much to drink on Saturday night I made the rash decision
“WE WILL GO IN THE FAIRTHORPE”

B/H Monday arrives wife Shelley and I go round to my Fathers to collect the car, wheeled her out of the garage loaded in the picnic (can’t go anywhere without food). Both got into the car turn on ignition, press the starter, foot on the accelerator ! twang throttle cable snaps ‘OH S___T’ what do we do now?
Off the the local Wilco store 2 miles away £.94p sees the purchase of a bike brake cable inner (V/usefull tip by the way) with the correct nipple back to Dads, thread it through, connect it up and on the road in 40 mins flat. So we are on the way at last. 45-50 most of the way she went like a dream. Of course one forgets that open air motoring puts you in touch with lots of airborne smells, such as burning smells and bonfires etc so stopped to check a couple of times that it was not us.

Arrived safely without incident met by Tony Stanton, we were the only Fairthorpe, I don’t know what Sunday was like but on our area were 4 Olympics,1 Rochdale GT, 1 Peerless GT, 1 TVR and a Gilburn 1800GT.
The place was full of Loti 7 types, I am sure there were more of them than people at the show, you have seen one you’ve seen them all.

Spares next, managed to get enough seals of various types to do the 2 doors, boot and tops of the front inner wings for £13. A new pair of engine mounts for £8 the pair, door V blocks £1 each. Still need windscreen to scuttle rubber seal and Temp gauge. ANY ONE HELP PLEASE?

Journey home was completely relaxing and uneventful took just over an hour engine purred all the way. Oh! pork and stuffing sandwiches great as well.
That’s all for now but there will be more.`
Well done Rob, glad you are getting plenty of use from the car!
Posted by Martin Collins at 9:26 pm No comments: 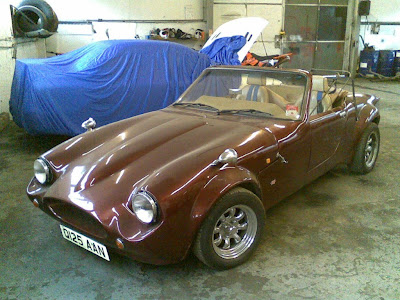 I have heard from Jeremy Mason that he is reluctantly parting with his Fairthorpe Pathfinder V8, this car is widely regarded as the best one completed. It is fitted with a new 4.6 litre Rover V8 engine supplied by Britpart in Shropshire and a 5 speed box, alloy wheels and is kitted out with beige leather interior trim. The kit was lovingly assembled by a husband and wife team and was given a top quality paint job in a very eye catching metallic burgundy. Jeremy has spent a lot of money on the car which has a had lot of new parts fitted recently. Here is some spec on the car:- 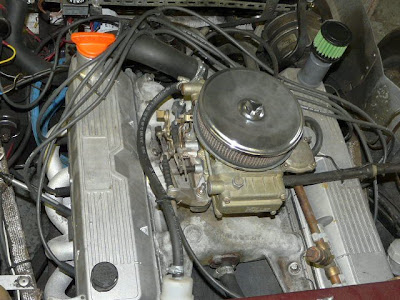 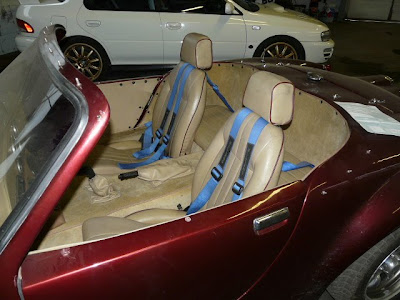 The car is booked into Brightwells Classic car auction on 11 MAY 2011 at Leominster, the estimate is £5000-£6000. More pictures are on the auction site:-http://www.brightwells.com/ClassicCarsMotorcyclesAutomobilia/ClassicVehicles/Catalogue.aspx