I`d like to wish all the Fairthorpe enthusiasts around the world a very Happy Christmas and all the best for the New Year. If you have a car that needs restoring or just a bit of tinkering to get it back on the road 2012 is `the year` to make it happen. Fairthorpes are appearing at events in increasing numbers so why not come and join in, i will be adding a list here shortly of all the main events Fairthorpes will be taking part in during 2012.
If you would like any advice or encouragement drop me a line and i will be pleased to help. I hope you have enjoyed the blog over the last twelve months, there will be plenty more next year, if there is something you would like to see on here to do with Fairthorpes let me know.............Martin
Posted by Martin Collins at 8:08 am No comments: 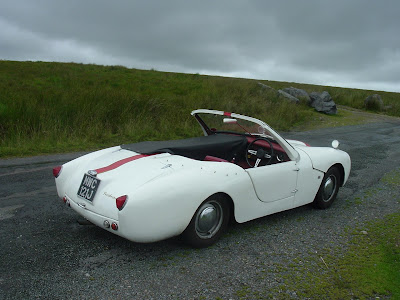 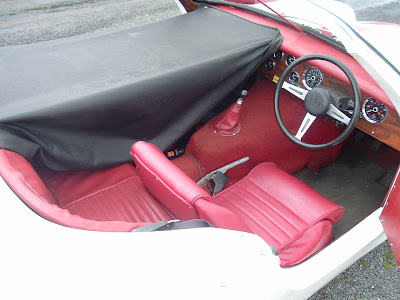 This weeks car is the MKV Fairthorpe Electron Minor of Barry Stock which is fitted with a 1300 Spitfire engine. Barry won the furthest Travelled Fairthorpe to this years Gathering at Donington having driven from his home in Ammanford in Wales. The car was registered in 1971 and was previously owned by another club member Alan Lowes, as can be seen from the pictures the car is in very nice condition and unusually for an Electron Minor the MKV`s were built as a 2+2`s. The MKV is a rare beast, i have only seen pictures of 3 cars and probably only a handful were made. 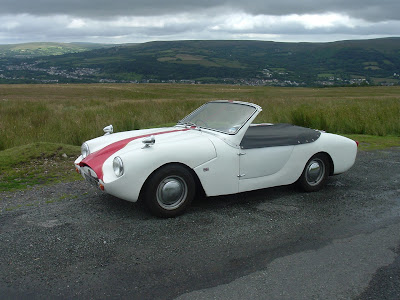 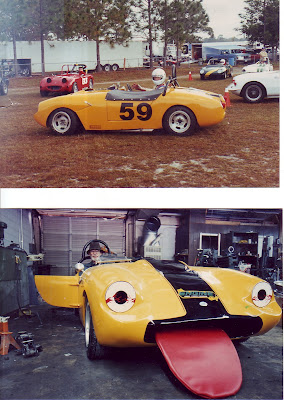 This weeks pictures are of a Fairthorpe EM race car in America, they were taken a number of years ago and obviously the owner has a good sense of humour! The car was owned by Bill Clark, then a member of the Fairthorpe Sports Car Club, does anyone know of Bills current whereabouts and whether he still owns the Fairthorpe, his last known address was in Nashville Tennessee.
Posted by Martin Collins at 9:20 pm No comments: 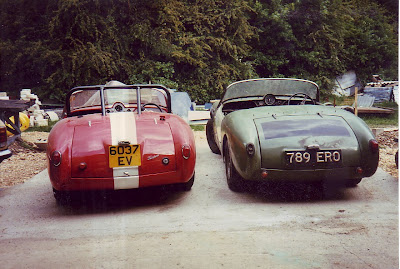 A while back on the blog i was asking if anyone knew where the MK1 Electron Minor 6037EV was now, the car is seen above alongside my car 789ERO 20 years ago. Following a dig through the Fairthorpe club archives i found the car on a membership form which had a date 10 years after i last saw the car. The guy was only a member for one year so i called the telephone number to enquire if he still owed it. The car was long gone, he had bought it in a dilapidated state having been left open to the elements for a number of years. The hardtop and wire wheels which had been on the car when we sold it were gone and all the trim was soggy and rotten. He had given the Fairthorpe a make over, removing the racing roll bar, respraying it a light blue and having it all re trimmed. The car was then sold to a guy in France but he had no contact information, as he had just bought the car to do up and sell on. The trail looked like it had gone cold but i mentioned the facts to a couple of club members and hey presto the picture below turned up in my inbox. 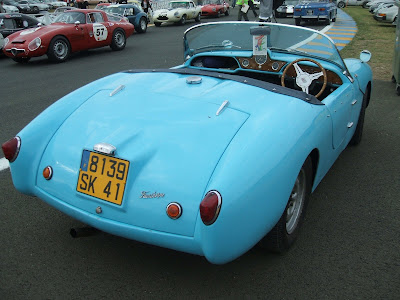 This car was pictured at the Le Mans Classic in 2008 but unfortunately the owner was not found. I think you will agree if you look at the boot lid and the position of the indicator lamps and Fairthorpe script badge that this is indeed John Ward`s old racecar 6037EV. Another pointer for me is the use of Hillman Imp bonnet hinges on the boot lid and doors, i fitted these as the old original hinges were shot, most people replacing the originals use Herald boot hinges. I am sure the current owner is blissfully unaware of the cars previous competition history, another car with plenty of stories to tell!
Posted by Martin Collins at 9:25 pm No comments:

Following a recent conversation with Dave Randall the Historic Sports Car Club Road Sports Championship registrar there is some good news for people considering racing their Fairthorpes in that championship. Electron Minors will be accepted with 1147 and 1300cc Triumph engines and now also with 1200cc Ford pre crossflow engines. I dropped Dave an email with a scan of an original Fairthorpe brochure which listed the Ford 1500 GT engine as an option. Dave`s reply was `I would also be prepared to consider a 1500 Ford pre x flow engined car to run in Class C. Our basic rules haven't changed, and this isn't written in the regs, it is at the discretion of the registrar and on a by application basis, but I can assure you that any reasonable application will positively encouraged.` Climax powered Electrons are also eligible so hopefully we may see a Fairthorpe or two competing at some point in the future, they have a very competitive history in the Roadsports championship having won it outright plus winning the class championship a couple of times. For anyone wanting more information about the championship you can contact Dave Randall at the HSCC or take a look on their website http://www.hscc.org.uk/championships.html
Posted by Martin Collins at 9:54 pm No comments: