Pictures of the week. 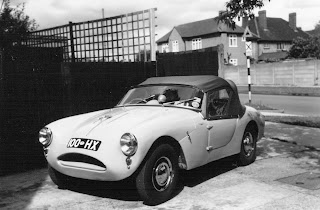 Here are a couple of pictures which have been sent to me by Ken Coad, the first is of the Electron Minor which Ken owned in late 50s-early 60`s. A lot of effort was put into making his car one of the nicest looking Fairthorpes on the road. This car survives but with a different registration as Ken kept the number when he sold the car.
The second one is of John Greens EM, John was the Fairthorpe works manager at the time and had fitted his car with a Ford engine and an Ashley style bonnet, the car was very successful in club races in the UK.

Posted by Martin Collins at 10:01 pm No comments:

There is currently a 1963 Electron Minor on ebay, this one was advertised on there last year, not sure why it is for sale again but looks to be a good project car from the pictures.
Here is the link:-