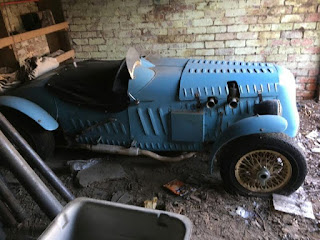 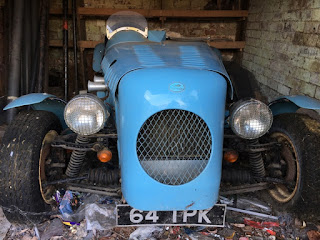 Fieldings Auctioneers will be selling a unique Fairthorpe `Special` on February 4th, the car is built around a 1961 Fairthorpe Electron Minor Mk1, the original body seems to have been disposed of many years ago and an aluminium tourer type body made and fitted. The car retains the Fairthorpe running gear including Standard Ten front suspension, it has been fitted with disc brakes on the front and a Triumph steering rack, the wishbones have all been drilled for lightness. 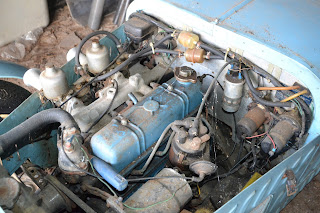 The engine according to the log book is a 948cc Triumph or Standard ten unit with twin SU carbs but looking at the inlet manifold it looks more like a 1296cc engine, the car is registered as a Fairthorpe, and has an enamel Fairthorpe badge on it`s nose. The conversion appears to have been quite well done from the photos I have seen but it has obviously been standing for a while so would need recommissioning before use. 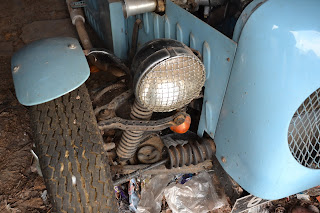 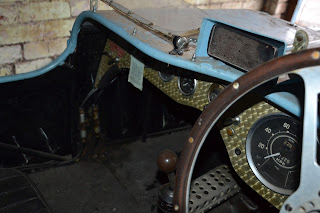 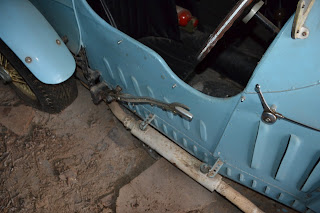 Fieldings website is at http://fieldingsauctioneers.co.uk/auctions for contact details and more information. The Fairthorpe Sports Car Club hold the original Electron Minor moulds should the auction winner wish to return the car to it`s original body shape.
Posted by Martin Collins at 11:35 pm No comments: 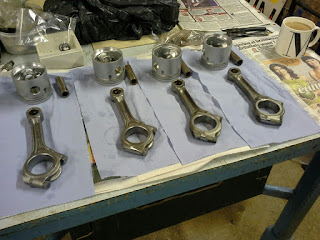 This time last year I removed the 1300 Spitfire engine from 789 ERO as it had head gasket failure and very high oil consumption, the engine just seeing out the last club event of the year with several stops along the way to top up the water which was entering no 3 cylinder and causing the car to run rough. The idea was to build up the replacement engine which had been lightened and balanced over the winter so it was ready for the spring............then things got turned on their head when we made the decision to move house. That move took up most of last year, first there was work needed to finish the then current house so we could market it and get the best possible price, this paid off and we were able to get more than the asking price as two couples battled it out to buy it. We ended up moving in with family for several months while the purchase of our new house went through so everything including cars was put on hold and in storage. Due to my working away from our new home until my transfer came through at the end of November nothing happened on my Fairthorpes last year so I intend to make up for lost time in 2017!
First job is to get the replacement engine rebuilt and in 789 so it is useable for the coming events, I would like to also use the Fairthorpe for a few AutoSolos once the engine has been run in. So I togged up in plenty of warm gear today to get the pistons fitted on to the con rods, these had been lightened and balanced over a year ago and were still all wrapped in their boxes. Upon removing them I found the odd spot of surface rust, lesson one here is I should have unwrapped it all and oiled or greased it to offer a bit more protection from any dampness in the air. I thought the wrapping would suffice for a month or so, but they ended up being stored a lot longer than anticipated! I gently removed the rust spots with some 800 wet and dry used with some oil then washed everything in the parts cleaner before drying.  The pistons have to be fitted into the cylinder bores with the arrows on the crowns facing forward and the bearing caps on the con rods facing the camshaft side of the cylinder block so when assembling you have to be careful that everything is assembled the right way round! Due to the workshop being so cold at the moment (no heating - 3 degrees outside) the gudgeon pins were reluctant to fit into the pistons so a handy trick is to put the alloy pistons into very hot water which makes them expand in relation to the pins so that is what I did. 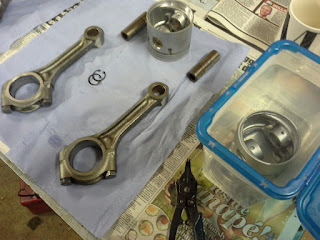 The gudgeon pins and small end bearings in the rods were oiled up and the piston removed from the hot water, dried then oiled where the pin fits, the pins, rods and piston then pushed together much easier, don`t forget the pin circlips, one is fitted per piston before the pin is pushed in, the other added once the pin and con rod are in place, make sure the circlip has the sharper of it`s sides facing outwards.  The cylinder block was painted a few weeks ago in Black as the previous engine was in BL Green which led many a casual under bonnet browser to think that it was an A series engine. The block had been in a steam clean machine at the machine shop when the work was all done all that time ago but having had a good look at it today I have put it in the parts washer as tomorrows job to give it a through clean inside to remove anything the machine shop missed. Once that is done I shall be fitting the piston / rod assembly to the block, I will update the blog at that point. 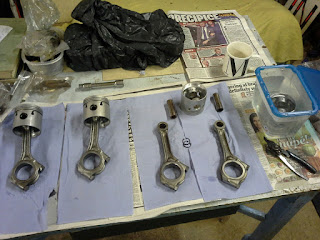