Fairthorpe racing news from down under. 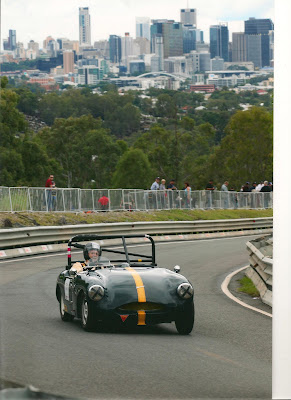 This weeks Fairthorpe is currently being raced by Fairthorpe Sports Car Club member Les Whelen from Australia, he kindly sent me these pictures of his car and some background history to it.

BRIEF HISTORY:
Found advertised in the local Trading Post for $A4000 in late 2005. After inspection bought it dismantled with boxes of parts, many brand new, and bits and pieces. Rebuilt from chassis up. Factory plate shows Chassis Number 10433 indicating late 1959 build. Was road registered in NSW in early 1980s but no other history known.
As found picture 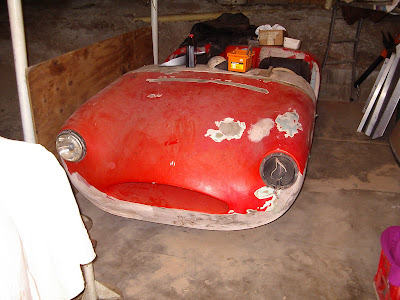 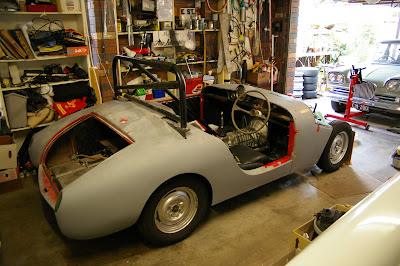 Alternator replaces generator and 45DCOE Weber carb, replaces original twin SU’s (These came with the car however). Front end fitted with later Herald/Spitfire disc brakes. The front end was a real puzzle because it had been cut up and at first the car rode very nose-up but many adjustments later is now fine. Restored as an historic race car so not road registered, but Confederation of Australian Motorsport (CAMS) refuses recognition because not FIA Homologated and has later modifications but allowed to run as “other” category in many events.
To overcome CAMS attitude most driving is done under the auspices of the Golden Era of Auto Racing Club (GEAR) where drive days are organized for us oldies to have fun on Queensland’s two major racing circuits- Queensland Raceway and Lakeside Park.

COMPETITION HISTORY:
1. Speed on Tweed 2009/2010 – Sprint event approx 1km long, one car at a time in classes. Fastest time in class wins. Held around houses in Murwillumbah on the Tweed River in northern NSW – tight corners, up hill and down.
2010 Best time for Les Whelan’s Fairthorpe Electron Minor – 1.02.4853

5. Historic Lakeside 2010 – Lakeside is the only former F1 race circuit still used in Queensland. In early 60s for the Tasman Cup and AGP drivers such as Jim Clark, Graham Hill, Frank Gardiner, Bruce McLaren, John Surtees, Chris Amon, Jack Brabham, Denny Hulme etc raced there watched by young fellas like me. Tight, up and down, known for destroying cars (One left hander is called Hungry Corner). My first attempt at ‘racing’ with around ten cars in my class but because of my lack of classification I found myself in a group comprising Porsche 911s, a TVR, a Mallock U2 Mk8, BMW 2002, hot MGs and Minis etc. Ran last with time of 1.27.284. Mallock U2 first in my class at 1.06.3855.
Les and the Fairthorpe in action! 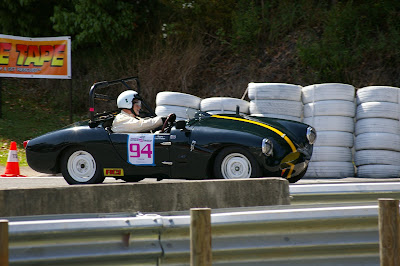 This year, 2011, I will probably enter all of the Sprints and Hillclimb again but only enter Regularity at other Historic events. (In Regularity the object is to circulate at a given lap time consistently so you are racing against yourself not other cars which will be circulating with you)
It`s great to see the cars being used all around the world, if anyone else has pictures and info on their cars i`d be happy to post them here for all to see.
Posted by Martin Collins at 9:04 pm 1 comment:

Following a request from a contact in Europe i have done some research into the International competition history of Fairthorpes as there seems to be a lack of published information for people wishing to use their cars in Historic racing.
It is widely known that Air Vice Marshall Don Bennett competed on the Monte Carlo Rally in 1959 in an Electron Minor and 1962 in an Electron Climax, (4th in 1001-1300cc Class ) but it was a surprise to me to find out that he also did the 1959 RAC Rally and the 58 Tour de France in Electrons with Peter Riley navigating in car no 133. The 1963 Spa Sofia Liège Rally was done in car no79 by Alex Mylonadis & wife in a Fairthorpe Triumph............I am also looking into other possible rallies the cars competed in and will publish here anything i find.
Here are a few pictures and entry list/results. 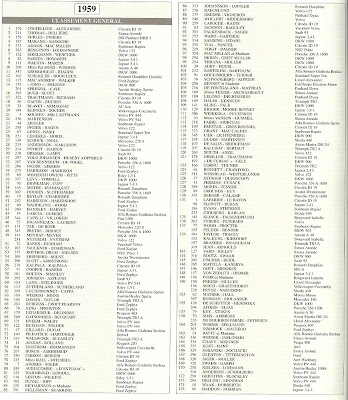 The car used on this rally was an Electron Minor 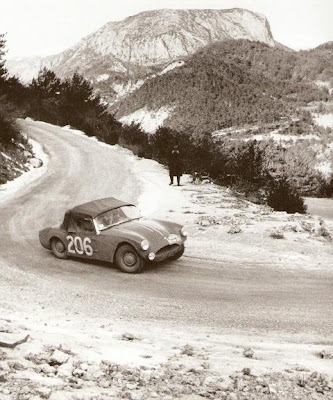 Here is the result sheet for the 1959 RAC Rally, the car used was an Electron with the Coventry Climax engine. 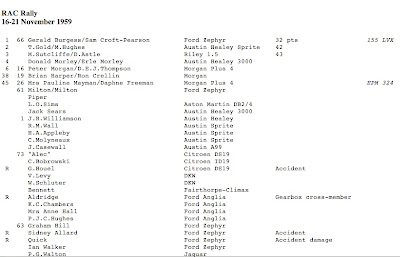 Here are the results from the 1962 Monte Carlo Rally 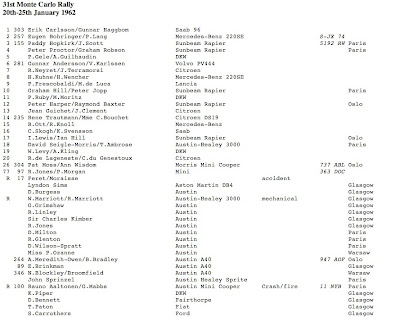 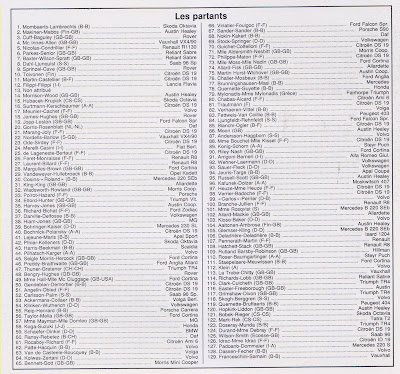 Fairthorpes have been used extensively in circuit racing from 1957 to the present day, as and when time permits i will try to catalogue those that there is information on or i know of. Most types have been used, Electron Minors, Electron`s, Zeta`s, Rockettes and John Green even raced an Atomota! The Formula Junior was not raced in period as far as i am aware but Ron Welsh is making up for lost time and competing (and winning) with it over the last couple of years. Several people have kindly sent me the link to the `Racing Sports Cars` website which has quite a list of events that Fairthorpes raced at in period, this is obviously the tip of the iceberg but is a good starting point. the page address is:- http://www.racingsportscars.com/cars/search.html?make=fairthorpe

The 1961 4hr race at Pescara was a round of the F.I.A World Sportscar Championship and had 2 Fairthorpe Electrons competing though sadly neither finished. Car no 116 was driven by Mylonadis / Stefani and car no 120 was driven by Gabrio Del Torre which retired with electrical problems. Fairthorpes are listed as entries for several other F.I.A races but are down as did not arrive. Unless someone turns up the results from these we won`t definitely know if the cars ran or not. I hope in the fullness of time to create a separate page with all known race events for Fairthorpes, please feel free to contact me with any information regarding events and i will include these on the list.

Posted by Martin Collins at 9:42 pm No comments:

Picture of the week.

I have not posted a picture of 789 ERO for some time so this weeks two pictures are of Little Nero taken at Silverstone 50 years apart, the first picture was taken in June 1959 at the Eight Cubs race meeting with Frank taking a 1st and a 3rd on the day. The second picture was taken in July 2009 at the Silverstone Cassic event during the lunchtime parade. Frank is driving the car for the first time since he sold the Fairthorpe in 1962, you can almost see the smile from here! Paintwork is still to be finished but the car has now covered quite a few miles. 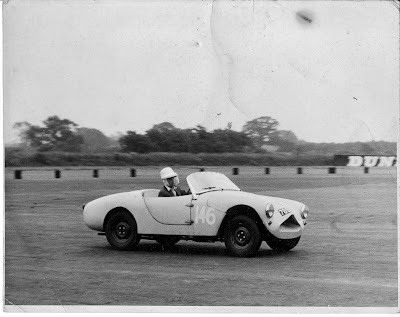 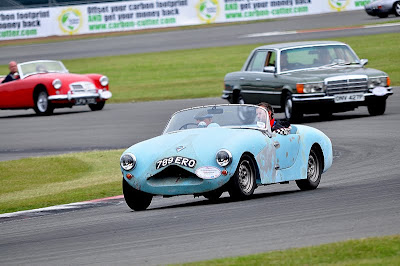 Posted by Martin Collins at 11:14 pm No comments: