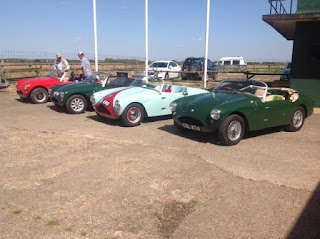 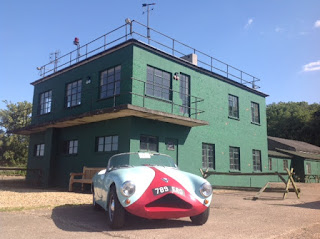 This years Fairthorpe Gathering returned to it`s usual date of the first Sunday in August after last years date switch to take in the AutoSolo event, this provided us with a nice sunny day but with plenty of wind to keep us cool. This year the venue was RAF Twinwood Farm in Bedfordshire, American Band leader Glenn Miller left here aboard a Norseman aircraft on December 15th 1944 and disappeared over the English Channel without a trace, his disappearance still a mystery. On site the control tower has been restored as a museum to the famous Band leader and various other small museums use more of the war time buildings on the site which kept club members busy when they fancied taking a breather from talking about the cars. 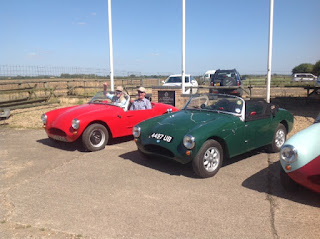 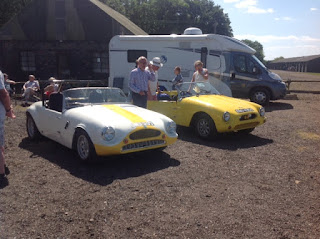 Nine Fairthorpes assembled on the day from various parts of the UK, The list (in no particular order) were, WEW 707 (Brian Townsend), MMC 121J (Barry Stock), CSL 674 (Bob Balding), 4497 UB (Richard Holden), HSV 270 (Ray Starkey), 789 ERO (Martin Collins), UNT 760 (John Worthing), UNJ 203 (Brian Jackson) and BBD 496B (Rob James). Also Brian Waters kindly brought along the engine hatch from his Atom Major restoration, this has become a fixture of the recent Gatherings with a different part each year, I am now trying to guess which parts we will see next year, keep em coming Brian! Several other owners and club members attended, Graham Mitchell has recently acquired the ex Freddie George EM, as this requires a full rebuild he arrived in a very low mileage MG Midget, Dave and Gillian Malins arrived in their unique Tornado Tempest. A couple of EM`s were very close to making the event but running out of time to get ready were those of Alan Green and Mike Bridge, both were eagerly awaiting the chance to drive their cars on the road in the near future. It was also nice to see Multiple TX owner Gary Davis along, I am looking forward to seeing his Rover V8 powered car once it is completed. Amongst other members present were our club President Barry Gibbs and wife Honor, David Green with his son, Dave Bumstead and Anna and Derek Bentley. Unfortunately I was so busy chatting during the day I have probably missed some people off the list so apologise to you if I haven`t noted you here!
As usual there were two main awards up for Grabs and as expected the Furthest travelled award was contested between the `usual suspects`, Richard Holden and Barry Stock. The winner of this award is usually one of these two hardy owners who show dedication beyond the call of duty in travelling to the event year after year in all weathers, your effort is greatly appreciated guys. Richard`s mileage was 150 whilst Barry clocked up 211 miles, that is just to get there, at the end of the day they turned round and had that distance again to get home. Congratulations to Barry, this years recipient of the John Green Trophy. 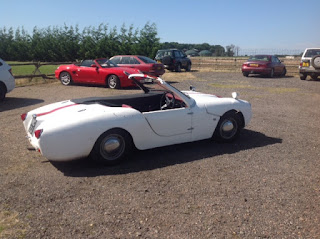 This years Best Fairthorpe award was a hotly contested affair with a 3 way tie which caused a bit of head scratching, luckily three people were still holding onto their voting slips and were seemingly oblivious to the problem that was looming! Once they were handed in there was a single car which emerged on top, the winner being Brian Townsend, this years recipient of the Frank Collins Memorial Trophy, well done Brian. 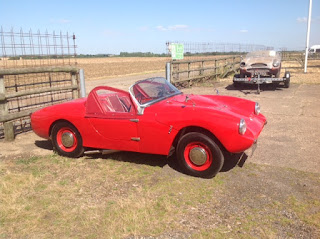 Unusually we actually had a third trophy winner this year as it was decided to present John Worthing with one as he had trailered his `Barn find` EM to the event having only bought it two weeks previous and joined the club the week before the event. He had resisted even giving it a wash to show the as found condition before starting the strip down and rebuild, we were all interested to see that one of the cars horns was only held on by a very dusty pair of tights, I bet that was an interesting trip! 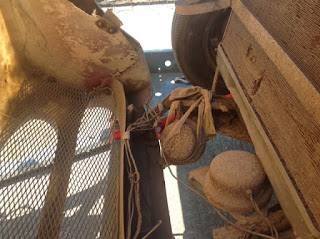 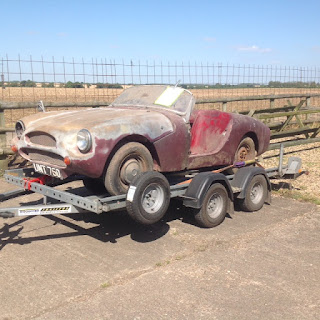 All in all, a great Fairthorpe day which everyone seemed to enjoy, I makes it all worth while to see so many owners and ex owners in deep conversation about the cars. I would also like to thank my long suffering wife Sarah for her help with the event and producing the various cakes which were eagerly consumed by people on the day . I can assure those that were not finished went to a good cause (me).
I hope to meet many (if not all) of you again at next Years Fairthorpe Gathering, the venue will be the Bubblecar Museum near Boston in Lincolnshire http://www.bubblecarmuseum.co.uk/
The date will be Sunday 6th August, I am hoping to have a Saturday convoy event as well to some of the local places of interest for those that wish to make a weekend of it. The museum have a very nice camping field for those with motor homes or tents and I will be providing a list of local B&B`s for those who prefer a bit more comfort, so make sure you put it in your diary.
Posted by Martin Collins at 9:04 pm No comments: 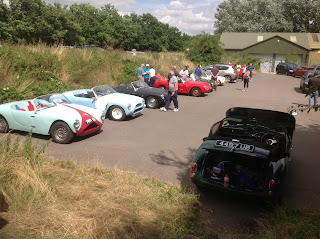 Well this years Gathering is nearly here, now less than a week away and I`m keeping my fingers crossed that the weather will be fine on the day, it looks promising at the moment. Full details of the event can be found in the previous blog post below, one omission is the start time, Twinwood tell me the gates will be open at 10.30am so no need for a crack of dawn start unless you are one of the hardy Fairthorpe owners who will be in the running for the Furthest travelled award on the day! I hope to meet many old friends and owners on the day, if you have an interest in Fairthorpes you are welcome to come along and join us............
Posted by Martin Collins at 7:40 pm No comments: