Picture of the week: A Fairthorpe Electron Minor with a difference 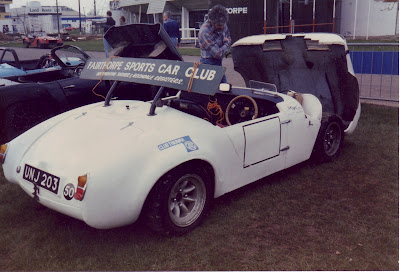 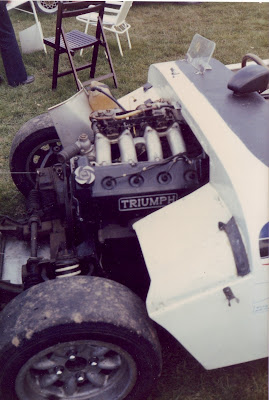 The subject this week needed two pictures to do it justice. They were taken in 1986 at the Fairthorpe Sports Car Club AGM, which was held that year at the Stonleigh kit car show.

The car is a 1961 MK2 owned by Brian Jackson. It was bought by a friend of his in 1968 and was originally fitted with a 948cc Herald engine. Over the next few years Brian and his friend gradually modified the car, first fitting it with a 1300 Spitfire engine, then a Triumph Vitesse 6 cylinder and finally the current Dolomite Sprint engine.

The rear suspension, originally the Fairthorpe designed independent set-up, has been replaced with a Ford Escort axle with Dolomite suspension, while the front end has had Spitfire suspension towers fitted. The radiator has been moved back and fitted into the tail section bodywork behind where the passenger seat would have been. Also the car has been fitted with Escort works-style bubble arches, giving the car a much more muscular appearence.

The car was sprinted, hillclimbed and autotested through the 70s and 80s, however from 1972 it was taken off the road and trailered to these events until around the mid 80s. After languishing at the bottom of his friend's garden for many years Brian rescued it and is currently in the latter stages of a restoration. He's hopeful it could be on the road again later this year.

Posted by Martin Collins at 3:15 pm No comments:

Picture of the week - Atom Convertible and early Electron chassis 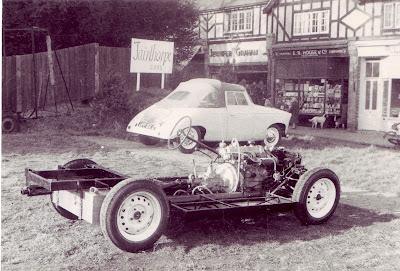 According to my records, this picture was taken around 1957 in Chalfont St Peter outside the Fairthorpe works and features an Atom Convertible in the background with an early Electron chassis in the foreground.

The Atom Convertible is either a MkII or MkIII model and will have had either a 348cc or 645cc BSA motorbike engine. The gearbox was an Albion and the car was chain-driven.

The Electron chassis has been fitted with a Coventry Climax 1098cc engine and Triumph TR suspension and steering. Normally the petrol tank sits inside the boot; this one however has the fuel tank under the chassis which may indicate it is a very early car.
Posted by Martin Collins at 1:00 pm 2 comments:

Labels: Atom, Picture of the week

On 15th August 2010 we'll be holding a Fairthorpe gathering at Stow Maries WWI Aerodrome in Essex. The event is open to all Fairthorpe fans, not just owners, so if you have one, had one or want one this event is for you! We already have several racing Fairthorpes coming, as well as E.Ms, Electrons and a Pathfinder.

Owner Russell Savory is doing some amazing restoration work of the airfield and has offered to include a guided tour of it as well as a tour of the R S Performance workshops, which house many V6- and V8-engined high performance sportscars.
If you fancy a great day out among like-minded Fairthorpe fans, put this in your diary and then email me on kartman.nascar24@btinternet.com to let me know you're coming. There'll be refreshments available to keep you going and prizes for the best-looking Fairthorpe and the furthest traveled Fairthorpe.
Posted by Martin Collins at 10:07 am No comments:

Fairthorpe picture of the week 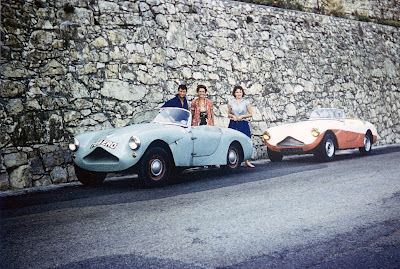 From now on I'll be publishing a Fairthorpe picture of the week taken from my extensive file of images that I've been collecting. They won't all be of Electron Minors though - there will be Electrons, Zetas, Rockettes, Atoms, Atomota, Electrinas, Trippers, TXs and Pathfinders.
So what is the image this week?
It's 789 ERO taken in August 1959 in the South of France during my parent's honeymoon. Despite being uncommon at that time, Frank and Audrey were amazed to see another Fairthorpe Electron Minor coming the other way on an isolated coast road! Note the lack of indictors on the other car - these were an optional extra in an Fairthorpe Electron Minor kit back then, as were a second windscreen wiper and fibreglass floor pan on the passenger side instead of the very basic wood pan provided!
The registration of the other car is UCG 664 - I wonder what happened to it and where it is now? Any ideas?
If you have any photos of Fairthorpes, feel free to send them across to me in an email and I'll select the best ones for publishing.
Posted by Martin Collins at 3:00 pm No comments:

Fairthorpe for sale on eBay

There is currently a Fairthorpe Electron Minor for sale on eBay if anyone is interested in taking a punt on a nice little classic kit car. The ad states it is an Electron but we all know better just from looking at it.
Have a look at the eBay ad here
By the way, to the Anonymous commenter who mentioned a Fairthorpe 'barn find' back in March please get in contact with me for a further chat. I've been compiling a record of surviving cars for the last 30 years and would like to find out which one this is.
Posted by Martin Collins at 10:58 pm No comments:

As the car had been standing for over two decades, the brakes were going to need replacement parts but I wasn't sure what condition the axle was in because the casing was very grubby and had a lot of surface rust. The rear axle was stripped of its component parts, all of which were checked for damage or excessive wear, cleaned with degreaser and then reassembled with new gaskets. As it turned out the rear axle casing only needed a good wire-brushing, degreasing and a coat of black Smoothrite.New rear wheel cylinders and brake shoes had to be purchased to replace the old worn ones, but the adjusters only needed cleaning and greasing. Assembling the rear brakes and fitting the drums with their retaining screws completed the work on the back axle and it was then fitted to the recently refurbished trailing arms. 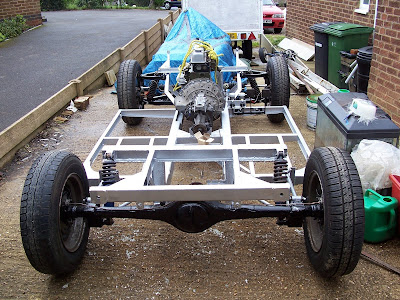 rear axle installed
Attention then turned to the front brakes. The car originally had drum brakes, but it was clear these had been replaced with Triumph Spitfire disc brakes by a previous owner to improve braking performance. Unfortunately they were heavily corroded so a new pair of discs were fitted onto the Spitfire hubs and a new set of bearings fitted and packed with Castrol LM grease (high melting point). The brake calipers were partially seized so these had to be dismantled, cleaned, given a coat of black Smoothrite and fitted with new seals. The old pads were kept as they had very little wear and they were attached into the calipers with their pins and R clips. Finally the calipers were fitted onto the hubs, which were in turn attached onto the uprights and the bearings adjusted as per the Haynes Triumph Spitfire manual instructions.
The brake master cylinder was seized and upon stripping was found to have a heavily pitted internal bore so a replacement (0.75 bore) was necessary. The Fairthorpe originally had a master cylinder with a standard-sized reservoir but I decided to fit a larger 60mm diameter reservoir instead because it provides more fluid so there's less chance of the level dropping to critical if a wheel cylinder leaked, a situation that could leave you with no brakes! The new cylinder's operating rod had to be switched with the original Fairthorpe rod to sit the pedals back into the right position - it was far too long and would have positioned the pedals at an impossible angle too close to the driver. 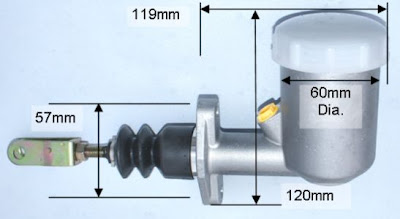 replacement brake master cylinder
The clutch and brake pedal assembly was cleaned using degreaser, painted with black Smoothrite and fresh grease was pumped into the nipples. New pedals were fitted to the pedal assembly, as the rubber on the old ones was perished and worn, but luckily I had a stock of these as they are no longer available. The pedal assembly and master cylinder were then refitted to the chassis and the master cylinder joined to the pedals with a new clevis pin and split pin. New copper brake pipes were run round the chassis to replace the old corroded steel ones while new stainless steel braided flexible pipes replaced the old perished set, and the brass unions cleaned. The brake system was now filled with brake fluid and bled several times to remove any remaining air. 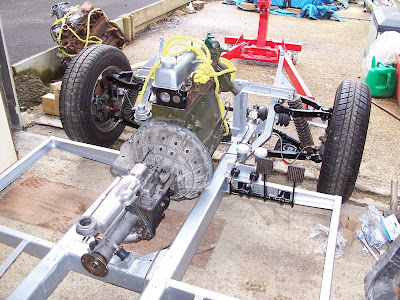 pedal assembly to the right
So now I had a rolling chassis and it was time to fit the floor pans and body shell.
Posted by Martin Collins at 9:08 pm No comments: