Fairthorpe pictures of the week. 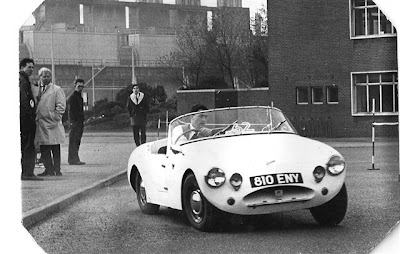 Picture of the week this week is of Gethin Jones in his first Electron Minor taken in the early sixties. Shown at an autotest in the Steel Company of Wales car park.
The second picture shows PBW 889 The photo was taken at the start of a Spanish Rally in 2003, Gethin owned this car as well. 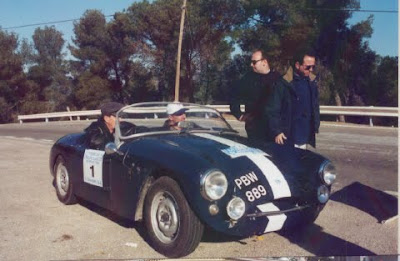 Posted by Martin Collins at 9:48 pm No comments: 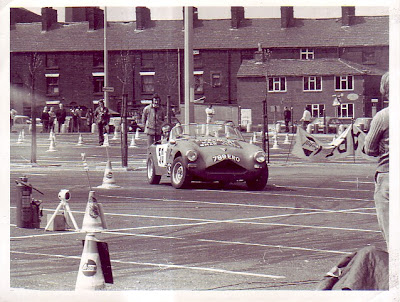 Whilst on the Fairthorpe Sports Car Club stand at the Classic Car show held at the NEC recently i met with Rob Finegan who is an old friend of Mick Moore. Mick owned my Fairthorpe 789 ERO from the late 60`s through to about 1987, he then sold it to the guy i bought it from in 1989. I have spoken to Mick on several occasions and asked him about photos taken when he was competing in `Little Nero` unfortunately although he has some he is unsure where they are. Rob has come up trumps though and kindly sent me a picture of Mick in 789 at Moor Lane car park, Bolton, 1976, in the Warburton sponsored Autotest. Of his time with the car Rob said `Mickey was pretty quick in those days, there was nothing really to touch him!` The car is now 53 years old and it has been owned for all but five or six by just three people, my Father Frank, myself and Mick.
Posted by Martin Collins at 3:51 pm No comments: 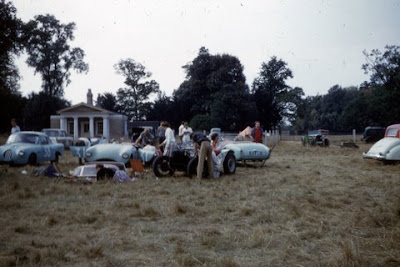 I have been in contact recently with a couple of past Fairthorpe owners who have kindly sent me some pictures taken when Fairthorpes were the competition car of choice. They have given me permission to post them on here for posterity and i`m sure you will get as much enjoyment as i have from looking at them. The picture above was taken at what looks like a grass Autocross and was probably taken in 1959 as the Fairthorpe on the right looks like it might be registered 100 UMY which is Peter Butt`s EM. This car was supplied in light blue gel coat but Was painted crimson red at a very early stage of it`s life, it is still in it`s gel colour here. I think the centre Fairthorpe might be John Green`s car SBL 88 as there is a red hardtop in front of it which John had, his bonnet was later changed to a one off Lenham style as you can see in another picture in this post. The Fairthorpe on the left is an Atomota which may have been driven by Don, Torix or Noreen Bennett. The picture below was taken at Snetterton race track and shows Peter`s Electron Minor 100 UMY ( now in red )on the start line waiting for the flag to be dropped. Both these pictures were taken by former Fairthorpe owner Graham Butcher. 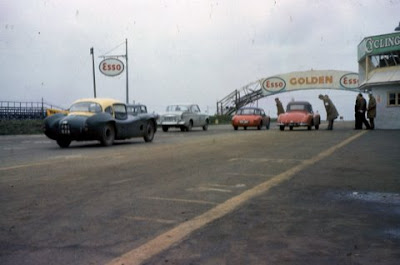 Graham has also sent a picture of himself competing in an Autotest in the mid sixties, Graham`s car was registered 9 AXU and was painted Black. The car was a regular at Autotests and Autocross events for several years before being sold on. 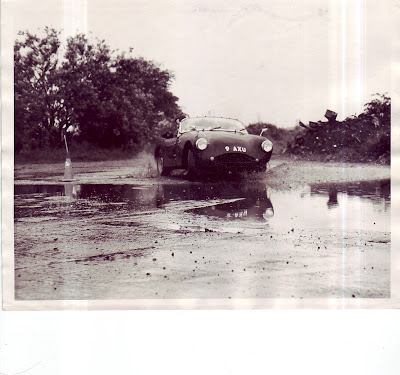 The final picture for todays post was sent by another former owner Ken Coad, his car was registered 100 HX and was generally acknowledged to have been one of the better finished Fairthorpes at that time. Ken`s car was also light blue and is on the left of this picture taken on Ealing Common, probably in 1960. 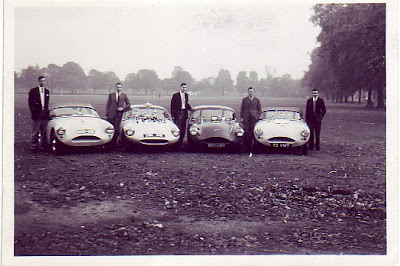 In the picture from left to right are Ken Coad, John Green who was then also the Fairthorpe works manager, Peter Butt, Gerald Golding and Eric Coad. As mentioned earlier John`s car was now sporting an Ashley style bonnet and was powerd by a Ford Anglia engine as opposed to the original Standard 10 engines in the other cars. Peter Butt still owns his car to this day and for the first thirty years it was campaigned in races, sprints, hillclimbs, Autocrosses and Autotests, i was given my first drive of a Fairthorpe at a Denham grass Autotest in Peter`s car and promptly won the class! There is also an interesting story attached to Ken`s car which i will write about shortly so watch this space!


Posted by Martin Collins at 7:18 pm No comments:

Neils Abild is currently looking for a Fairthorpe windscreen frame and pillers, with or with out the screen itself. Neils is racing his car which was featured in an earlier article on this blog, at the moment he is running with an aero screen but for some events he has to have an original type screen and frame on the car. If you have one which you no longer need and are willing to sell please contact me at kartman.nascar24@btinternet.com and i will put you in contact.
Posted by Martin Collins at 5:56 am No comments:

I have been asked by several owners recently about wiring colours for Electron Minors.

I`m sure many Fairthorpe owners are confronted by the usual birds nest of different coloured wires behind the dash board and under the engine bay! Most classic cars of that age have had the wiring added to or modified over the years so to give you a helping hand here is the original sheet supplied to Fairthorpe builders when they received their kit. This as can be seen from it`s title relates to kits supplied in 1960 but it should be pretty similar for most years. Please bear in mind that your car may have had something different done to it since it was originally put together, this is what it should have had when new. 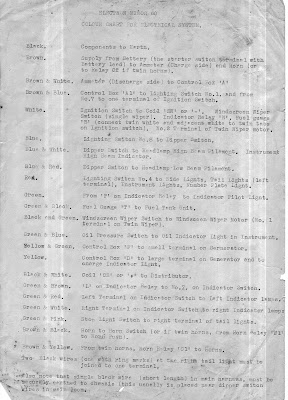 Posted by Martin Collins at 4:25 pm No comments:

Another Fairthorpe returns to the roads of Europe. 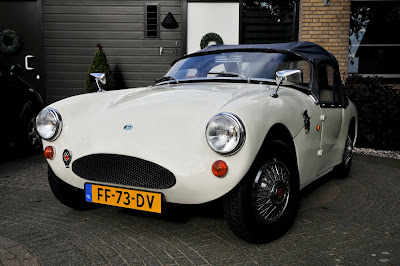 Henry Brentjens from Holland has owned his Fairthorpe Electron Minor mk1 since 1978, he bought it from a chap in Berkshire and did a lot of work to it before getting a Dutch MOT and licence plate. Henry drove the car over to the UK several times in the early eighties, but like many classic cars lack of time and money meant that the car subsequently sat unused for 15 years. Encouraged by some of his old friends in the Fairthorpe Sports Car Club Henry once again embarked on a rebuild that took him over a year to complete, now that he has it on the road again he is looking forward to putting some more miles on the car. How about another trip to the UK next year Henry, we`d love to see you at a club event with the car.
Posted by Martin Collins at 10:11 pm No comments: