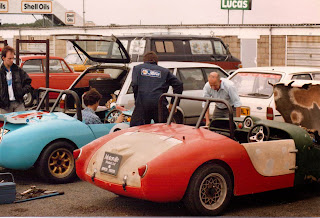 This weeks pictures were taken in 1986 at the Silverstone 8 Cubs race meeting by a member of the Fairthorpe Sports Car Club. The light blue Mk1 EM is 2421DD and the unpainted Mk2 is 133 JGU, both cars have had their Triumph engines replaced with 1558cc Lotus Twin Cam engines. It was a rush to get both cars to the event and as usual we arrived late meaning that I had to do 2 laps behind the course car during a break to enable me to race the car having not practised in it. A leaky water pump meant the second car did not get a run. 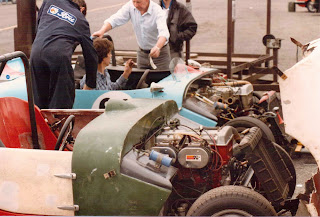 2421 had a five speed box and a Ford back axle, the Twin Cam was race tuned and had come from the back of a Chevron sports racer, as you can imagine it went like the clappers! Unfortunately starting the 2nd lap of the race the oil pressure went and I had to pull off on the exit of Copse corner, but only after showing a clean pair of heels to a 2.8i Capri. An engine strip revealed a broken cam bucket that had distributed itself round the engine. Being short on money meant that the engine came out and was sold following an expensive rebuild, we then fitted a tuned 1600 Ford x flow with twin Webers and then sold the car on. 133 JGU had the Twin Cam removed and a strip revealed badly corroded water ways, probably as due to a lack of Anti freeze during it`s life so that too was sold on. A mildly tuned 1300 xf Ford engine was fitted and the following year it was taken back to the 8 Clubs and I took a 1st place in one of the handicap races, another Fairthorpe coming home in second. The car was later sold and raced by John Watson (not that one!) and it now resides in Japan, does anyone have any pictures of the car taken over there, it was royal blue with a white stripe when last seen over here.
Posted by Martin Collins at 7:09 pm