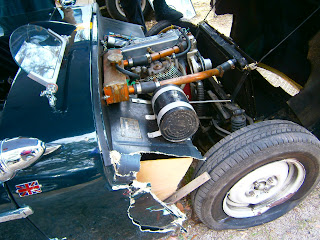 Fairthorpe owner Les Whelan has been in touch from Australia with some bad news regarding his EM. In late November he was entered in a Sprint Meeting at a small country track. He ended the season with a great trophy for Second in Class but his Fairthorpe was severely damaged when another car with supposed brake failure collided with him.


The impact (at 108 kmh according to the others cars 'computer') buckled the front driver's side wheel, thrust the engine across to knock the top off the coil and back to squash the air cleaner, it took the fibreglass off behind the wheel, with cracks in the dash and the floor. He suspects the chassis/outrigger may be bent but hasn't yet investigated. The bonnet was only slightly damaged but with the damage to the wheel the steering rack may also be a problem. They kept him in the ambulance for about 30 minutes afterwards but fortunately in his words ` I don't seem to have suffered any 'damage'. We all wish your car a speedy recovery Les, keep us informed on how the rebuild is progressing.
Posted by Martin Collins at 3:57 pm